Three days to go and lots to see 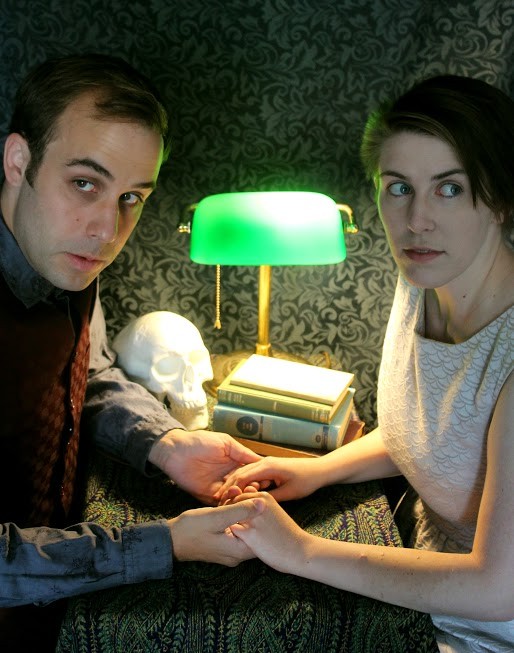 Dan Bray’s play Follow Me, produced by The Villains Theatre as part of the Atlantic Fringe Festival, is a silly, tightly constructed homage to Early Modern plays, like Faust, which centre dramatically on the calling forth of spirits and devils for various nefarious purposes.

Follow Me begins with renowned clairvoyant Gunter Buxtehude professing to the audience that he is able to tell them about the spirits that are following them, and whose energy is continually manipulating their lives. He is interrupted by a girl with a stutter who turns his show on its head, calling into question Buxtehude’s legitimacy as a medium, while also suggesting that perhaps he is even better at it than originally thought.

Bray plays Buxtehude with great comic sensibility and banter with the audience. Colleen MacIsaac gives a lovely performance as Ria, who, it is revealed, is richly layered. This allows her to have beautiful theatric outbursts and also moments of MacIsaac’s signature earnestness. The relationship between Buxtehude and Ria builds the tension of the play nicely, is rooted in the play’s silliness, but also manages to have nuance and subtext.

Follow Me is very funny and very ghosty. It’s a lovely Fringe offering from the Villains.

Violet, the sole character in Courtney Siebring’s brilliant This is Violet, rarely leaves her bed. This beautiful draped four-poster is her confessional, her stage, her safe place where she contemplates her failed “marriage” to Robert, performs song-and-dance routines, and alternately ignores and answers her constantly ringing phone. For all but a few moments, she wears a half-mask and speaks in a highly stilted manner. Violet, it becomes clear, is playing a character called “Violet.”

Logistics meant this play got a later review, and that’s a damn shame, because Violet is easily one of the best Fringe plays I’ve ever seen. It’s achingly tragic and very funny. Siebring’s main credits are as a “voice actor,” and her performance shows why that profession is getting some recent much-deserved respect. Sebring acts every single syllable—the most mundane lines are given resonance and humour through her delivery alone. This vocal commitment is matched by a physical one—she’s in constant motion, and there’s never a moment when you feel even slightly detached from the character. (Siebring’s a hell of a singer and dancer, too!)

There are still three chances to see this play and I encourage you to take one. You will enjoy the time you spend with Violet. (Oh, and, if you’re in the market, apparently the bed is for sale....)

Commedia dell'arte influences this fun show. Courtney Siebring is Violet. Violet has an obsession. And maybe a compulsion. She's bedridden due to anxiety in a draped four-poster queen size that serves as both her shelter and her stage, surrounded by an audience of teddy bears. A survivor of a wedding gone horribly awry, Violet's initially hard to like because of her self-pity, but her fantastic optimism won me over. Violet tells us about her lover Robert and about her impatient mother, which reminds us to be grateful that we are not tasked with having to raise Violet. Her natural exuberance is infectious, and I found myself wanting to join Violet in her demented dance. I recommend you drop by Violet's bedroom and listen to her story. Like a nervous diva in a Tennessee Williams play, she's charmingly delusional and very funny.

The road to healing does not come easily for anyone. Same can be said for Echoes, a play about Sam and Tilda, (played by Justin Moir and Emma Leigh Rivera), two characters stuck in a room within an asylum. Under the Big-Brother scrutiny of a doctor, known only as “The Person,” Tilda tries convincing Sam they are being imprisoned, not treated; that The Person is a manipulator who will take Sam away like he has with Tilda’s previous friends. The two spend the show as controlled variables with the audience determining whether Sam and Tilda are real or merely constructs.

The plot, albeit intriguing, feels circular and repetitive. Tilda and Sam never seem to grasp resolution, continuously bumping against the fishbowl-confines of their script. It’s a clever metaphor on powerlessness, but it gets tiring after a while. In his initial ten minutes onstage, Moir commits the cardinal sin of having his back to the audience. He soon finds Sam however, endowing him with proper skepticism and reservation. The show’s true star is Rivera, who gives Tilda the perfect wounded soul and necessary self-resilience. There is a lot of heart behind Rivera's performance. We will surely be seeing more of her in the future.


Once You've Found It

While not explicitly queer, Donovan Jackson's one-man show will certainly resonate with queer and trans folk. Mr. Jackson uses puppets, mask, projections, monologues and dance to engage us in the life of a young adult, Bruce, still coping with the residual pain of feeling abandoned and unloved as a child. The play opens with a flashback scene from his childhood involving puppets: Bruce's parents are apparently fighting, and the puppets are eavesdropping to see what the outcome will be for Bruce. I loved this scene and his use of the puppets to express contrasting aspects of Bruce's psyche; one Apollonian and the other wildly Dionysian.These puppets will reappear as Bruce struggles with some of the soul-shrinking aspects of adult life, partying, a lousy job, and love.

Bruce makes his first appearance emerging from a nightmare, struggling to free himself from his bedspread. At first this left me a bit bemused, his struggle seemed disproportionate. Yet as the play unfolded I began to see the bed spread as a a potent metaphor for Bruce's depression. As someone with depression, my bed can sometimes seem to be the safest possible place, my hideout. But it's also at times the hardest place to escape.

Bruce is stuck, in depression, and in life. In the powerful ending, Jackson uses his dance training to portray Bruce's struggle for freedom and his courage in taking steps to engage with life. Bruce has a developing relationship with a character named Sam, who we don't actually see (except perhaps until the very last moments), and I loved that Jackson never discloses Sam's gender identity, always referring to Sam with the gender-neutral ponouns they/their. Theirs is a gently described love story, or at least a deep friendship, which perhaps is the source of the title, after all, once you've found it ...

Donovan Jackson is a gifted performer, his play is honest, ambitious and thoughtful; highly suitable for teenagers and adults. It is a shame there were only half a dozen people at the performance I saw on Tuesday. It's a good show with something to say. I hope many more people see it.