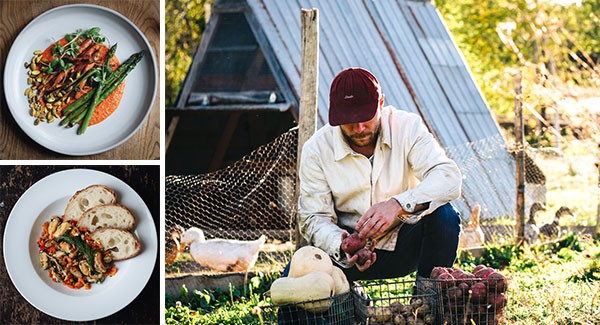 When Justin Floyd was tasked with designing the menu at Avondale Sky Winery’s patio restaurant, he settled on a simple concept.

“I wanted to make food that I would eat while drinking wine, on a deck, on a sunny day, in a beautiful place,” he said, motioning to the vineyards cutting patterns in the Newport Landing hills, vine-laden trellises stopping just metres away. “ helps dictate the food.”

The resulting menu is a concise offering of simple dishes at affordable prices.
“You want the ingredients to speak for themselves,” he said, acknowledging the cliche but also its truth, and insisting that local farmers grow the most flavourful produce available.

“I’ve been amazed by the variety of fruit and vegetables we grow in Nova Scotia,” he said. “The melons and hot peppers...the flavour we’re getting out of a simple tomato.”

Floyd’s respect for farmers willing to grow small quantities of vegetables for chefs to experiment with is genuine. “Ted Hutten [of Hutten Family Farm] is my hero.”

Floyd developed his appreciation for local food on Gottingen Street in Halifax, first at Edna, working alongside Joe MacLellan and then as sous-chef to Dan Vorstermans at Field Guide.

“The vision Dan had for food helped me realize what food could be in Nova Scotia,” he said. “And Bryan Picard at The Bite House in Cape Breton, he’s shown that you can make good food anywhere.”

In May, Floyd left his bustling chef gig at Field Guide to work the kitchen at Avondale Sky. The New Brunswick native had moved from Vancouver Island to Halifax seven years previous with the intent to one day live rurally, and in June he moved to Ashdale with his partner, Kaitlyn Hagen, who began working as the winery’s events and marketing manager.

Avondale Sky Winery will keep its restaurant open until the end of October, but there will be no hibernating over the winter. The team will be busy all fall, putting the finishing touches on its newest project: An open-concept dinner and event space in the property’s original farmhouse.

Mosher House, named for the first family to live there, will house a dinner series to begin early this winter and run through the spring. Floyd and Hagen worked together to renovate and appoint the house, which can accommodate up to 40 people.

“It’s a blank canvas; we can create any dining experience,” said Floyd. “The plan is to bring out some of my chef friends, for example, maintain my connection to the city.”

Attracting people out of the city is a big part of Floyd’s vision for Avondale Sky’s food programs.

“I want this to be the place where a carload of Haligonians come for lunch,” he said.

The food might inspire a carload of city kids to make a day trip to the country, but that day trip could easily turn into a move after a conversation with Floyd and Hagen on Avondale Sky’s patio over a glass of rosé.