Journeyman genre actor Eric Balfour shines in Haven, but isn’t afraid to mine his darker depths for a role, as in horror movie Cell 213 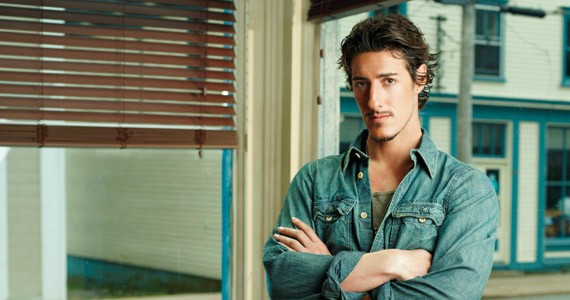 You're sure to know who Eric Balfour is, even if you've never heard of him. A Los Angelino whose elongated face is punctuated by a distinctive jutting jawline, Balfour is the kind of actor whose mug is more recognizable than his moniker.

At 34, he's already amassed nearly two decades' worth of movie and television credits, so chances are you've seen him in something.

The odds of a Balfour sighting increase significantly for fans of the science fiction and horror genres. Though he's appeared in mainstream fare such as Six Feet Under, What Women Want and The OC, the consummate "working actor" has consistently shown up in creepy productions.

In the past couple of years alone, he's had lead roles in the 2010 sci-fi flick Skyline, the television show Haven---a Stephen King adaptation shot on the Nova Scotia's south shore, the first season of which just came out on DVD--- and the recently released psychological horror film Cell 213.

"There's no rhyme or reason to it, really," he says of his growing genre resume. "You look at what's out there and what your options are and try to make the best choices.

"Haven is, I guess, a sci-fi show, but what drew me to it was not the supernatural element. It was more the character and the quirky humour of the world. Cell 213, I didn't really care that it was a horror movie."

However, when Balfour relates how he got in the mood to play Michael Grey, a morally suspect lawyer who finds himself in a haunted prison in Cell 213, it becomes evident that he's in touch with his inner darkness.

"We shot in this gnarly old prison east of Toronto that had been shut down. I decided to spend most of my time between takes in this old cell," Balfour says. "I brought my stereo and made this mix of very unhappy and aggressive music to try and get into the mindset of living in this world. I obsessively watched these really dark documentaries and films.

"I started kind of going crazy myself. I got a copy of the Satanic Bible and started ripping out pages. By the end of the shoot I had every page of the Satanic Bible pasted up on the walls of this room. I'd gotten these old crime scene photos, death scenes, and sort of engulfed myself in darkness and pain and hate."

It's a much sunnier Balfour calling from the Chester set of Haven, though. Speaking with a slight surfer-dude accent and youthful enthusiasm, he says that after a few weeks of making creative changes on the fly, the filming of Haven's second season is settling into a groove.

Balfour plays the rebellious Duke Crocker alongside Lucas Bryant and Emily Rose in the show about a town whose people are beset by strange supernatural curses.

"By the end of this season, we're actually going to find out a big part of why Duke is in Haven," Balfour assures.

And maybe, by the end of Haven's sophomore run, more people will know Eric Balfour's name---although he has no desire to become a tabloid celebrity.

"Hopefully, whatever fame or notoriety comes is because of the work that I do and not the bullshit antics of my personal life," Balfour says. "In that sense I'm very comfortable.

"I'm glad that I'm more known for the work that I do than the club I was at last night."