Atlantis, Lockheed Martin and Irving Shipyard to install turbine, but cost to ratepayers is not known. 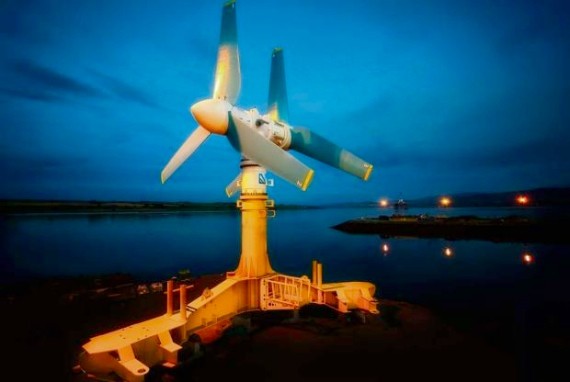 Atlantis' AK 1000 turbine will be installed in the Bay of Fundy.

Multi-billion dollar corporations are investing resources, time and money into developing tidal power in Nova Scotia, but if we’re to believe provincial authorities and the corporations’ reps, the corporations have no idea if they’ll make money or not.

Last year the province issued a Request for Proposal for development of a tidal facility in the Fundy Ocean Research Centre. The new facility will hook into a transmission line recently built with federal funds, and any power generated would be bought by Nova Scotia Power. The idea was that the new facility would help develop tidal technology, which has recently seen a major setback with the failure of a turbine installed by OpenHydro, a company owned in part by Emera, the parent company of Nova Scotia Power.

Five companies responded to the RFP, and Atlantis Resource Corporation of Australia was judged the best, although provincial authorities have declined to make public the scoring of the proposals. Atlantis will join up with Lockheed Martin and Irving Shipyard to build and install its AK 1000 turbine.

But at what rate will the corporations be able to sell power to Nova Scotia Power? “I don’t know,” said premier Darrell Dexter at a press conference announcing the deal. His staff subsequently said the rates will be established at some future date by the Utility and Review Board. “We’re doing this so we can sell turbines,” said Atlantis’ Tim Cornelius, discounting any concern about power rates.

Still, the UARB is presently considering a 64 cents per kilowatt hour charge for smaller operations selling tidal power through a “feed in tariff” proposal to be finalized in April. That’s about six times the 11 cents per kwh costs associated with coal generation, the prevailing source of electricity in Nova Scotia. The higher costs will be reflected in higher bills to customers.