Beach don’t kill my vibe: a guide to swimming pools

Natural bodies of water aren’t for every body. Wanna dip your toes into something other than a lake or ice-cold ocean? Join Jessica Flower’s pool party. 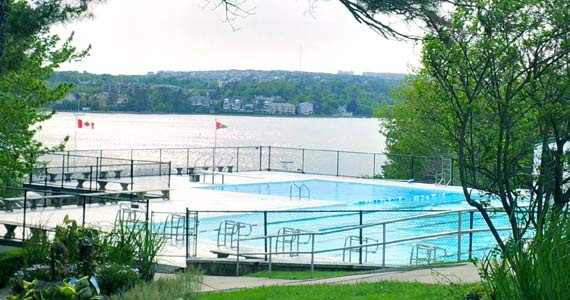 I have a problem. I love swimming. But swimming in the ocean, or even a deep lake for that matter, scares the crap out of me. (I blame a combination of childhood realities for my current conundrum; one being the luxury of growing up with a backyard pool. The other, a premature screening of Jaws. Such is life.) But now living a pool-less existence in Halifax poses an issue. Indoor pools, in my mind, are meant for winter and are far too humid for thick hair like mine. Plus—no way to soak up them rays. So, is it possible to recreate a blissful outdoor swimming experience without the threat of a fishy encounter? Like any committed water baby, I tested out Halifax's outdoor, human-made swimming holes.

First up: public pool
Halifax is somewhat lacking in the public pool department, which is understandable given our primo oceanfront location. There are three outdoor pools (The Common, Bedford, Cole Harbour) but the city's outdoor pool season doesn't start until the very end of June, meaning, when I went in search of a chlorine-infused soak, the pools were dry concrete pits.

Turning to less-public pools
I then ventured into the city's finest hotels in search of an rooftop aquatic escape. Two problems here. One, none of the hotels have the rooftop oasis I was hoping for. And two, you need a room key to get into the indoor option. Out of the 10 hotels I tried (I really wanted a swim, OK?) I managed to sneak into a grand total of one, and that was only because I timed it right and followed some unassuming hotel guest in. On the whole, the pools aren't very big but, if the cleanliness of the aforementioned public pools concerns you, you'll feel right at home.

Pro: They're practically deserted.
Con: This makes sneaking in behind a paying guest difficult.

Which brings me to the least-public of the options
The mother of all outdoor pools. (Well, there are four of them to be exact.) Outdoor. Heated. Waterfront. Salt water. It's pure bliss. But like all good things, it's a little too good to be true—the pools in question are hidden away at The Waegwoltic, a private club on the Northwest Arm. Having been poolside there before, I can attest to the hype. It's worth sneaking into. If you're ballsy enough to risk it (hint: go to the left of the security hut, down the footpath, past the tennis courts, the Lido is at the bottom) maybe don't go with a bunch of buds and a massive cooler of beers? Play it cool and opt for a polo and a L.L.Bean tote, ya bum. Or you could be a decent human being and pay the $750+ yearly membership fee.