Before Rise of the Planet of the Apes

All The Apes: A reboot of Planet of the Apes will hopefully consider the best of the six preceding Ape movies. 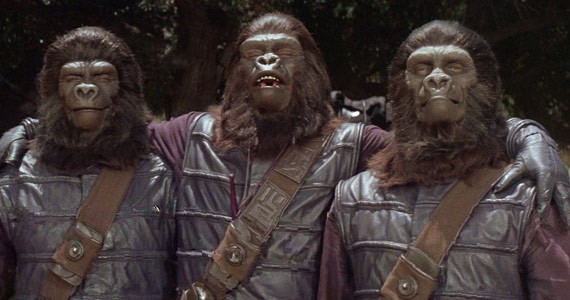 Rise of the Planet of the Apes will hopefully consider the best of the six preceding Apes movies. Dave Howlett channels the simian series and makes a few suggestions.

The original Planet of the Apes film ends with marooned astronaut Taylor (Charlton Heston) discovering, to his horror, that---spoiler alert!---the upside-down, simian-ruled world he's been trapped on is and always has been Earth, thousands of years in the future, and that humanity reverted to savagery after destroying itself in a nuclear war.

Director Tim Burton could have taken a few cues from Taylor; had he stepped back and looked at the original films in the blockbuster Apes series before shooting his 2001 remake, he too might have been able to see where it all went wrong. Burton could have also observed where and how the formula worked best, and made use of the strongest elements of the series to bolster his own effort. Instead, he ignored everything that had gone before, and the results were mediocre at best.

Here's hoping that the filmmakers behind the latest reboot, a prequel, Rise of the Planet of the Apes---opening this weekend---have done their homework.

The new Apes team would do well to remember that the success of the original Planet of the Apes wasn't just due to rifle-bearing gorillas on horseback and a bombed-out Statue of Liberty ---although those elements certainly didn't hurt. The smart, satirical script ---co-written by Twilight Zone creator Rod Serling---questioned the inherent nobility of humanity, and wondered whether Earth might not have been better off ruled by the beasts. It poked fun at the argument over evolution, and even threw in a nod or two to the counterculture movement (Heston's Taylor tells a disillusioned young chimp to not trust anyone over 30). Released the same year as 2001: A Space Odyssey, Planet of the Apes belongs to a time when science fiction dealt in ideas, not explosions.

Of course, the minds behind Rise could follow the path of the second movie, 1970's Beneath the Planet of the Apes, and just get weird with it. After all, there aren't nearly enough movies nowadays where veiny-faced, subterranean mutants with psychic powers sing hymns to an unexploded atomic bomb. That could be interesting, but you have to save something for the sequel. Perhaps instead, the filmmakers will take their cues from 1971's Escape From the Planet of the Apes, a movie that starts out silly---time-travelling chimps Cornelius and Zira go back to the earth ruled by humans and become celebrities, attending prizefights and getting drunk---and ends very darkly, with the apes on the run to protect their unborn child from murderous government agents.

Judging by the trailers, the new movie is modelled most closely on the fourth Apes film, 1972's Conquest of the Planet of the Apes, where the son of Cornelius and Zira grows up to lead a simian revolt against humanity. With its inescapable parallels to the Civil Rights Movement, Conquest remains the most thought-provoking of the sequels. Unfortunately, complaints about the film's excessive violence led to the more kid-friendly Battle For the Planet of the Apes in 1973, a directionless dud about humans and apes trying to live together in harmony.

Bottom line? The original Apes movies were at their best when they sought to challenge audiences with ideas, and at their worst when their sole motivation was to sustain a still-profitable franchise. If the creative team behind Rise of the Planet of the Apes forgets this, audiences may well be left pounding the surf like Heston in the first movie, damning the filmmakers all to hell.