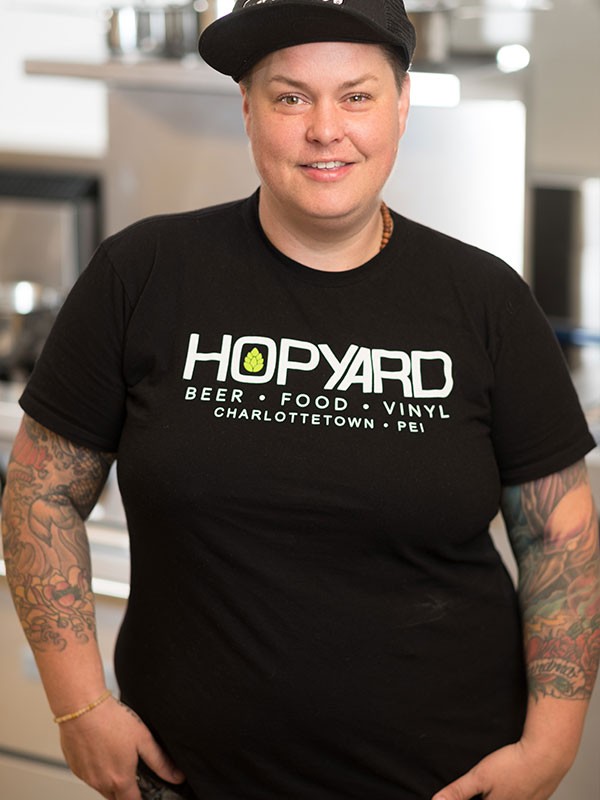 Jane Crawford just wants to have fun. A chef with two decades of experience, she worked in cities around the world and trained in Italy and France before following intrigue and adventure to Prince Edward Island. After eight years cherishing the island's fresh products and finding camaraderie in the culinary scene, Crawford—along with Brett Hogan and Mike Ross—opened Hopyard Beer Bar in Charlottetown 2016, and then the Sugar Skull Cantina in 2017.

This summer, they brought the Hopyard brand—and Crawford's themed, bi-weekly, $8 menus—to Halifax. (She says next week's menu is her favourite one yet.) We picked her brain about kitchen dynamics and the importance of playing with your food.

What landed you on PEI in the first place?

I just always wanted to live on the east coast on the premise that I'd heard the people were so amazing, and the beauty in general was a huge appeal to me. I was living in New Orleans, evacuated from Hurricane Katrina and moved home to Sault Ste. Marie, and found this job on PEI and was like, 'OK, I have nothing to lose.'

Why was it important for you to come to Halifax with the new Hopyard?

The really important thing was for us to be consistent between the two places and make sure that my personality got into the food. The food is often really playful and creative—it's really fun— we wanted to make sure the happy food we had at Hopyard that people enjoyed so much is translated properly here.

You're doing something different by changing the menu so frequently. What made you want to work in that way?

It happened two days into our first menu in Charlottetown. I took the two boys aside and said 'I'm going to change the menu every two weeks,' and they were like, 'Are you f'ing crazy?' I think I've done 70 menus so far.

The three of us put together the restaurant inspired by everything we've always wanted to do but hadn't been able to do yet: Creating a really fun environment for staff, and changing the menu every two weeks, not only for our clients but for our staff—they're never bored, there's always a fun challenge for them.

And just being able to laugh every day. I'm not kidding! To go to work and goof around a bit and have a great time but be productive and put out food that's high quality, that was really what we were looking for.

You've put a huge creative challenge on yourself. Are you ever about to change the menu and like, shit, I can't come up with anything?

No, this is a science lab now. We can all experiment. I can spit ideas out and so does my team. I'll be like, 'Guys I'm thinking K-Town next week' and it's a really interesting process, we make all of these new recipes and then on Monday morning it's like, 'Pull everything out, we're going for a different vibe.'

How did your path lead you to where you are now?

I've been in a lot of positions, I've lived all over the world. I went to the Culinary Institute just outside of Milan, I went to school in France and Denver. So, I graduated from a few different programs and had the complete pleasure of working in Europe for a few different chefs. But for me when it was my turn to design my perfect vision, the first menu at Hopyard, I wanted to do things that were super-different and super-fun. And it's just been rewarding.

A lot of people might have an assumption that a person with your background is going to be a certain kind of chef, and you're kind of turning that on its head.

And my personality is not necessary the industry standard. I've worked with chefs that have burned me, thrown pans, I've seen a chef take a Coca-Cola fridge and tip it over—I can't understand that anger.

When I was younger in kitchens and shared my ideas with people above me, I'd come up with cool, creative stuff, and they'd take credit for it. That is something I'd never do. One of the first things that one of my chefs said in Denver said to me was 'leave your ego at the door,' and I've never forgotten that.

This interview has been edited for clarity and length.