The Indigenous Voices Award-winning poet breaks down a poem with The Coast. It wouldn’t be fair to say Arielle Twist is on the come-up: The multidisciplinary artist and poet has been ripening words on the vines of her mind since at least spring of 2017, when writer Kai Cheng Thom became a mentor to her. She’d been seeing the world with the eyes of an artist for even longer, of course—but in time since, she’s been to the prestigious Banff Centre to complete a residency, has had her work published in most of the country's biggest arts and culture publications and has released her debut collection of poems, 2019's Disintegrate/Dissociate.

Twist says her work is "specifically for Indigenous, trans people," describing it as "Messy, queer, trans, feminine, Indigenous art. It’s very honest, which I think makes it kind of short and to-the-point, in a way. It’s messy, and fun, and cool—and most of it talks about sex, which is fun."

"I remember just writing it in the middle of the night, just smoking cigarettes in my bedroom," she recalls of the her process for Disintegrate/Dissociate.

"I don’t know what it was about poetry; I wasn’t a big reader of poetry. There was something so beautiful in saying something so profound in such little words. I think poetry gives me: It was the first time I was like Oh, someone’s hearing me think," she adds. "It kind of made me feel less alone, I think it’s really beautiful in how emotion is conveyed through poetry."

In short, she’s been doing this work—and excelling at it. Her latest triumph—winning an Indigenous Voices Award in the published poetry category earlier this summer—should be the final piece of evidence needed to convince you that it’s time to catch up to where Twist has been this whole time.

In short: It's time for you to hear her think.

To that end, The Coast called Twist and asked her to dissect a poem from Disintegrate/Dissociate. Here, she takes us through her poem “MANIFEST” line by line: 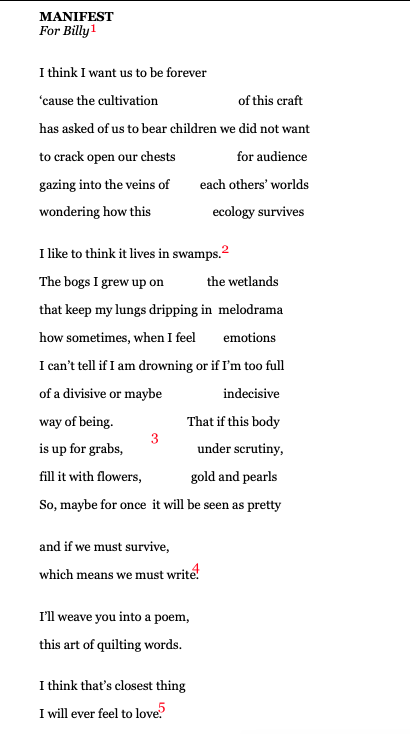 1.The poem was written for Billy-Ray Belcourt, "probably one of the most famous poets in Canada," says Twist. The two verse-crafters' time in Banff overlapped: "We met and we became best friends and we got matching tattoos of the mountain and he was the person who edited this book."

Belcourt's book “changed my life," Twist adds. "It was a young, queer Native person who’s Cree—I’m also Cree—writing about The Prairies and writing about love and pain and I was like, I want to do that."

2.
Twist explains the overall meaning of the poem, saying: "it’s about how the cultivation of this craft—the way we make art—asks us to...crack open our chest for an audience. So it talks about how we picked up this art form—and it came with a gaze and a critique from white people, wondering how we’re surviving as queer, Indigenous people in Canada—and it talks about how the ecology survives within ourselves."

Twist adds: "I wanna talk about the swamps and the land. I always bring it back to the land or my body in every poem that I write."

3.
When looking at a poem, it's as much about what's there as it is about what's not—and Twist's poem "MANIFEST" acts as a masterclass in the use of space to add an extra dimension of meaning: "I was really thinking about mountains," she says, explaining she wrote this poem while in Banff in 2018. By creating a structure to the verses that mimics the look of a mountain range, she's giving readers a cue where to pause for breath. ("Usually in poetry you can tell how to read it by how it’s structured," Twist explains.) It's also showcasing the land that helped inspire the words—a repeating theme in Twist's work.

4. "We"—meaning she and Belcourt—"had a conversation at Banff about how writing saved our lives, so 'if we must survive/which means we must write/I'll weave you into a poem/this art of quilting words' is me saying I’m writing this about you," Twist says.

5.What one line captures the entire poem? Twist says it's the closing line: It's her "saying I’m writing this about you and this is because this is what I think love is." She adds: "It’s like, I don't know if I know what love feels like, so this is the closest thing that I would feel to it."