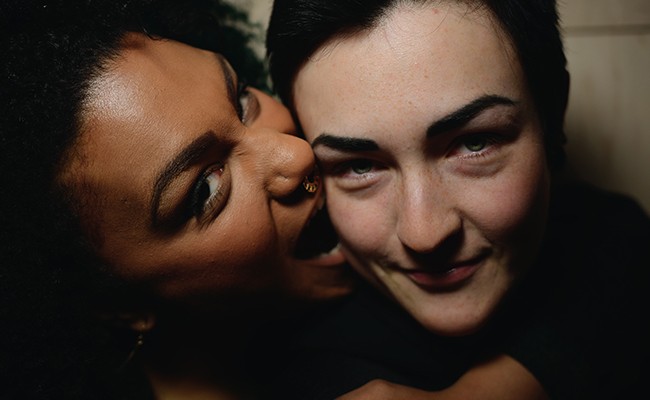 "Our goal is to give marginalized communities the space and time to create their own representation," says Emma Paulson, who along with Kate Macdonald makes up The Magic Project.

The two photographers and activists were chosen by Halifax Pride as this year's parade grand marshals. Their not-for-profit art initiative is Macdonald and Paulson's way of bringing marginalized communities to the forefront of conversation by allowing them to define their own identities.

"It's so necessary for marginalized communities to come together," says Macdonald, who is part of both the LGBTQ+ and Black communities. "There is no other way to perpetuate major change."

Macdonald and Paulson say they use The Magic Project to break stereotypes. It's about putting power in the hands of marginalized people, and supporting them as they represent and speak for themselves.

The Magic Project's first photo series, Black Girls are Magic, celebrated and empowered Black women by showing them in a different way than they're usually depicted in the media. The photos reached more than 24,000 people in their first day online.

Reeling from the positive response, Macdonald and Paulson considered other groups they could spotlight; following up with Black Kings are Magic and Queer People are Magic.

In January, the duo organized and hosted Transparent, a half-discussion panel, half-musical performance. Panel speakers such as Chudi Harris and Andre Fenton discussed issues Black men face locally and nationally, and then resolved the tension with music and poetry. The work led to The Magic Project being nominated by LGBTQ+ community members—and voted on by the Pride board of directors—to be named this year's parade grand marshals.

Paulson and Macdonald say it's "a huge honour" to be chosen, especially as Halifax Pride works to better reflect diverse voices.

Last year, the festival's organizing board received complaints about inclusivity and corporatization surrounding the parade and festival. Many have called for a boycott of Pride this year after a controversial annual general meeting that ended with members of the BIPOC, queer and transgender communities walking out in protest.

Adam Reid, executive director for Halifax Pride, acknowledges that Pride must do better.

"People expect more from us and rightfully so," Reid says. "But choosing this group who are celebrating folks of colour is sort of a no brainer. It stands out no matter what the climate of the community or the climate towards Pride. There's a spirit behind [The Magic Project] of community building that we want to recognize and acknowledge."

Macdonald has always enjoyed participating in past Pride festivals, even while noticing a lack of representation. She hopes, as inclusivity becomes a priority, that Pride will become more representative of everyone in the LGBTQ+ community.

Paulson views Pride as both a celebration and a political protest. It's an opportunity for her to recognize and stand with those who still undergo oppression.

"Pride originated from not wanting to be excluded, so to create exclusion within Pride is almost oxymoronic," Paulson says. "You have to make sure that there's space and room for everyone, and recognize you're fighting for all identities, not just your own."

The Magic Project plans to host something similar to Transparent again in the future, but there isn't a set date yet. In the meantime, a collection of their photo series will be on display in October at NSCAD University's Port campus.

Macdonald and Paulson are also working on a new photo project, Queer People are Magic 2.0: Pride Edition. The Magic Project will be at the Garrison Grounds after the Pride parade on Saturday to capture portraits for the series.