The EPIC triathlon hits Dartmouth on Canada Day: “It is a celebration of what one human being can achieve.” 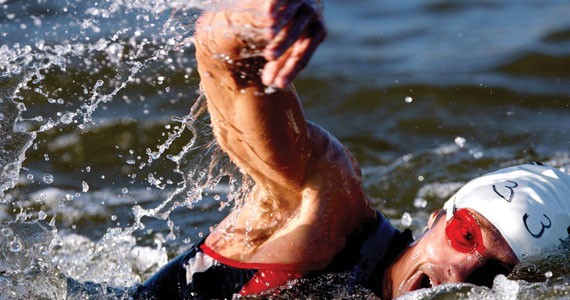 In 1999, amateur athlete Tim Chesnutt was working out at the gym when he noticed an interesting posting on the bulletin board. A triathlon was being held in the local area, and Chesnutt volunteered to hand out water during race day.

"The first third of the people ran by and they were just gone. Then the next third came---who were also in great shape---and they just blew by. But the last third of people ran past and they were struggling and hurting," he says. "I looked at those people and said, 'Hey, I can do that!'"

This DIY approach lead him to develop EPIC Dartmouth, a triathlon held Canada Day weekend that is set to be the largest race of its kind in Nova Scotia history.

The idea for the race initially began as training grounds to qualify for other races held on the east coast, but after the urging of his wife---who is an acclaimed triathlete as well---Chesnutt decided to make it a full-blown race.

Run in Dartmouth and the surrounding regions, the race begins with a 3,800-metre swim of Lake Banook, merging into a 180-kilometre cycle that stretches from downtown Dartmouth to inches of the Musquodoboit Harbour and back. Cyclists then dismount and run a 10.55-kilometre loop in Dartmouth. (EPIC runners do two laps of this loop, while IRON competitors do it four times---the length of a full marathon.)

Chesnutt stresses that the race requires more mental skill than Herculean feats of strength. "I think it's an important point that these aren't elite athletes. Not to say there aren't elites participating in the race, but for the most part these are very ordinary people. These weren't the superstars in high school. These are people who have made an extraordinary commitment to do this," he says. "It's like when Roger Bannister broke the four-minute mile. What, within a month a few people had already broken it again. People look and say, 'If he can do it, maybe I can do it.' Big ideas motivate people in a way normal-sized ideas don't."

And with EPIC Dartmouth, Chesnutt is certainly dreaming big. He has a three-year plan in the works, and hopes EPIC Dartmouth will land the city a bid to host Triathlon Canada's National Championship in the future. More than anything, he hopes the race will raise awareness of triathletes and races in the area, as well as inspire Canadians (and particularly Nova Scotians) to adopt a healthy lifestyle.

"Everybody knows about Simon Whitfield winning the gold in triathlon because it was a big event for Canadians, but so often people don't really know triathlons happen out here. So we said, 'Let's do it on the biggest weekend of the summer. We'll put it in the most urban area in the province and we'll hold it right in the middle for everyone,'" he says. "No one is going to miss this event going on, which is brilliant, because it really is a celebration of what one human being can achieve."

Matthew Ritchie is a freelance journalist in Halifax. He enjoys long distance running, but doesn't enjoy barefoot running shoes that fracture bones in his foot and prevent him from racing in the Blue Nose Marathon.