The singer-songwriter heads to SXSW, armed with an arsenal of tour experience and his latest album, In the Time of Great Remembering 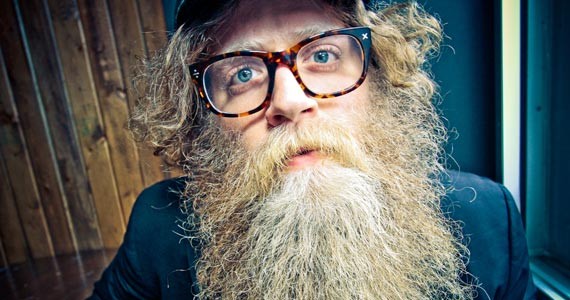 To say 2011 was the year singer-songwriter Ben Caplan broke would be an understatement. After leaving Nova Scotia early in the year, Caplan found himself on his first national tour, followed by gigs across Europe.

But if his recent stop in Halifax before heading to Austin, Texas for South By Southwest is any indication, 2012 may be the year Ben Caplan grows to new heights.

"When I got told that I was going to be playing at the top of the CN Tower, I thought it was wicked and couldn't wait," he says about gaining a spot at Canadian Music Week's opening night gala in two weeks. "But then when I got told I was sharing a bill with Joel Plaskett, I didn't know what to do."

But Caplan wasn't always expecting to play to crowds 1,815.4 feet in the air next to his musical hero.

Caplan began his love affair with music as a child, tinkering around on an old Casio keyboard. Discovering that he had a knack for picking out unique melodies, it wasn't until his grandmother bought him a guitar at the age of 13 that he began to take music seriously.

"Once I started playing I couldn't do anything else," he says. "I think the first song I wrote was in the first week of having that guitar, but the lyrics didn't come until later and were pretty awful."

He started off in a folk duo, moving onto a rock band before taking his songs solo. But even though Caplan was the chief songwriter, he says he always approached music from a group's perspective: "The way I think about music and write music, it always involves melodic themes that are not coming from me."

Originally billed as Ben Caplan and Friends, in 2007 he formed Ben Caplan and the Casual Smokers, a revolving-door backing band of friends who added rich textures and baroque atmospherics to his acoustic sketches.

As the band and Caplan's musical chops grew (alongside a beard that would make ZZ Top blush), he went into the studio in early 2011 to record the tracks that would make up In the Time of Great Remembering. Armed with a small pool of finances and limited hours in the studio, the band had to bring its A-game, forced to record the album in less than three days.

"In modern recording, so many times people just do it again and again until they get it right, then auto tune the performance. But we didn't have access to that kind of process, which meant we really had to jump up in our musicianship," says Caplan.

"We didn't have time to redo performances. We just had to go and play our asses off."

People took notice, including Symphony Nova Scotia, who has asked Caplan to play a show with the 40-piece symphony this November.

But as recognition for his band grows across the globe, the only thing left is to figure out is how to find time to record his new album.

"I think I kind of realized I'm not going to find the ideal condition that I used to for writing," he says. "If I want to keep doing my job---which I do---I have to be doing more than just gig. It's time to start figuring out how to do both at the same time."