A new album and a new “maximal” sound show up on Bend the River’s newest album, So Long Joan Fontaine 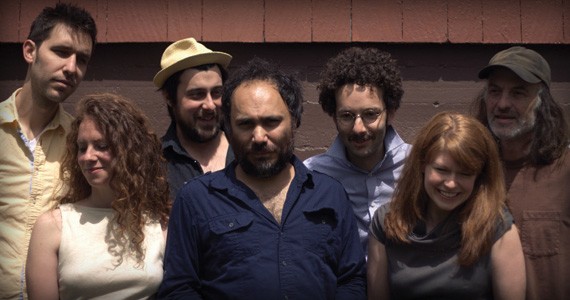 The music of Bend the River immediately conjures up a feeling of another time and place. What precise era it evokes is fleeting, but there's an undeniable sense of the past seeping through. Even a video for the new song "Assassins" features clips from the 1926 silent film Menilmontant. "Through the slow remorse of time, somehow you leave her behind," sings Ronok Sarkar, the band's songwriter, before asking, "Did you really love her all that much anyway?" The film and song are an unlikely pairing, but both speak to the power of nostalgia.

This video and the band's new album, So Long Joan Fontaine, point to movies as a particular source of inspiration. What seems most essential, though, is an interest in an ephemeral past. "The name Joan Fontaine, for some people, sounds like a name that you remember but that you don't know a lot about," says Sarkar. "It's tipping the hat to these little trickly memories in the back of your mind that you maybe don't know you have."

Since its debut album, Revolt of Angels, was released in 2008, Bend the River has added a few members to the band and evolved into a fuller, more soul-inspired sound. To be specific, Sarkar describes the change as "a move from 1971 to 1977." What does that really mean? "Our first record was more Americana," he says, "where our second record sort of flips into a bigger sound with Becky and Norma doing the background vocals. The tone of the band changed quite a bit between the two records." "It's really more maximal stuff," says bassist Adam Fine. "You've got more musicians, more harmonies, and there's more stuff happening."

Becky Siamon and Norma MacDonald are newer additions on vocals, as is Mark Bachynski, who also plays with Classified and The Caravan, on drums. "Rhythmically it's a little more aggressive," says Sarkar. Another change is the addition Sarkar's piano. "It really opens up the sound," says Matt Myer, who plays organ in the band. "It's a little less folk and a little more '70s."

"Another shift is that I spend a lot longer time writing. I've hit a rhythm where I can spend six months on a song," Sarkar says. "The band itself also influences the writing. Their ability to go into interesting textures lends itself to experimenting with songs." The goal, too, is to capture that spontaneity in the studio. "On the new album what you're hearing is also the band playing it live. There wasn't much multitracking, it was pretty much off the floor. I think people can hear when something's really fresh with the band."

In addition to harkening back to a '70s vibe, the mood of So Long Joan Fontaine is also influenced by the group's working dynamic. "Nobody is overly careful, which is what makes it fun," says Myer. "There is always somebody improvising something. It's really nice to come into an open situation and sort of play what you want."

As is the way in a small city like Halifax, each member of the band also has several other projects on the go. "There's really a lot of energy in Halifax for making music," says Myer. What keeps them coming back to Bend the River is easier to pinpoint than the band's sound. "It's a labour of love," says Bachynski. "We wouldn't do it if it wasn't."