With the haskap berry poised to be the next acai, one local business is aiming to make Canada its most important producer in North America. 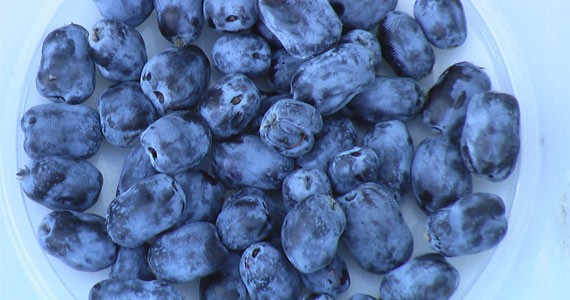 Some businesspeople talk about their work in a manner that speaks of self-interest. Logie Cassels has a tendency to speak quickly, but his interests aren't strictly his own.

"Nova Scotia is an amazing place," he says. "And it's worthy of more than just the paltry lip service it gets."

Cassels is the managing director for Haskapa, a company that creates juices, dried berries, jams and more using haskap berries, a member of the honeysuckle family. Haskap berries could very well be poised to be the new açai or wild blueberry, and he wants to see that happen. He says that the antioxidant-rich sweet fruit that is well suited to Nova Scotia's climate.

"At the moment there are about 500 acres producing haskap berries," says Cassels, "with maybe 100 in Japan, 100 in eastern Europe and about 200 in Canada, of which we are about 50. Canada, we hope, will become the most important haskap producing region in North America in the next 10 years."

And when that happens Cassels wants as many people as possible to prosper with him. "We want to share the wealth of this industry to everyone who wants to grow haskap," he says. "It's like open-source technology. If you want to know how to grow haskap, I will tell you."

Cassels admits that he wants those berries grown to the exacting standards and quality that he wants for his company, but argues that his ideas around farming aren't just about protecting his interests.

"We're not doing anything special, we're just letting it grow naturally," he says, referring to biodynamic farming practices--- a farming ideology that uses seasonal rhythms, composting and fertilizers from animals. "We farm like gardeners. We combine the old ways of doing things with modern technology, soil testing and biodynamic efforts, including composting and kelp."

What do haskap berries taste like? That depends on who you ask, but the general consensus is "delicious." Matthew Gass is the co-owner and general manager at The Wooden Monkey. "Most people's reactions were 'Haskap what?,'" he says. "People love the juice, it's so bright and vibrant. As far as the product goes, it is very versatile and just flat-out delicious."

Gass says they use the berry in a chutney for the menu's pork tenderloin, as well as in a fruit crisp, but it really shines on the restaurant's bar menu. "We use the juice in a couple of cocktails---one is the Haskap Crisp comprised of Ironworks vodka, Chambord, organic lemonade and haskap juice," he says. They also serve a Haskap cosmopolitan and plan on having it as part of a beer shandy this summer.

Cassels can't say enough about the juice--- the language he uses is often reserved for wine tasting. "Haskap has more tannin than a merlot grape," he says. "Now, because your normal berry doesn't have a high tannin level, juices die very badly on the back palate. That's why you need to boost the sugar level to make it pleasant. With haskap, because of its tannin level, the front and back palate is wonderful, it dies beautifully."

That wine-like approach to the juice also translates to its packaging. "If the juice is that good, why can't you buy it in a wine bottle?" he asks. "Why do you have to open the fridge, and chug it down like an orange juice? You can, but with our haskap juice, it should be savoured."

Enthusiasm notwithstanding, farming practices and terminology aside, for Cassels, it all comes down to one thing: taste. "We've forgotten that real food should taste good," he says. "Is it healthy? Absolutely. But what we stress is that it tastes great."