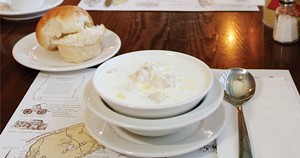 Not much says Nova Scotian fare like thick, creamy, home-cooked chowder. And that’s just what you’re going to get at The Esquire and, as the votes have again proven, nobody does it better. The Esquire’s four varieties of chowder—lobster, seafood, Atlantic fish and corn—all have one thing in common: they’re made the old-fashioned way with pure cream, clearly the ingredient of champions. In Nova Scotia, we know our chowder, and we have discerning enough tastes that sub-par chowder will not do. That makes the little trip up the Bedford Highway worth the drive.