Here are ten of the greatest live shows in the city's collective memory.

One of the most talked-about shows of the last 25 years. Unfortunately, that talk is about how everyone missed it. Advertised as “killer rock + roll from NYC,” the poster, featuring a photo from Evil Dead, is one of the most elusive of Halifax gig posters. A 1997 NSCAD exhibition, entitled Snapped Crackling Pop tried---to no avail---to track down one of those original posters.

Chronicle-Herald arts reporter Stephen Cooke had just finished grade 11 and was one of the few who attended (he has a poster---though not the Evil Dead version---to prove it).

“It wasn’t a sparse crowd, it was in the NSCAD cafeteria, and I’m guessing a healthy proportion of the student body turned out. There might have been over 50 people there,” he says.

“I remember the room was dark and there were a couple of video monitors on the sides, playing back what appeared to be images from a different show. Even those of us who might not have had a frame of reference for this kind of stuff understood that it was a unique performance. It was a pretty big deal to get any band from outside of the region at that point, let alone a bunch of art punks from New York.”

The best part? The show was completely free.

In 1995 Green Day was the biggest band on the planet. Three weeks after releasing double platinum album Insomniac, the trio played Halifax. How could that not blow your teenage mind?

“If you had asked me in 1995,” says Gerry Hubley host of CKDU’s Rocket to Russia, “’Who would you like to see come to Halifax?’ I’d have not hesitated. Green Day was my whole reason for getting up in the morning. I slept out for tickets and then didn’t stop moshing and crowdsurfing the whole time. It was short, fast, fun and amazing, everything punk rock came to mean to me as the years unfolded. The next day my grandmother called my house, telling me that the picture in the Daily News was of me surfing the crowd. I still proudly display that picture of me...no doubt annoying the fuck out of many people below me every chance I got.”

Green Day is arguably responsible for a whole new of generation of kids getting into punk rock and attending all-ages shows at Cafe Ole and The Pavilion.

with Thrush Hermit and The Quahogs

When I asked after the quintessential Sloan gig I expected several different answers. Invariably, one show at Camaro’s---a bar once found on the Gottingen Street strip---shortly after the release of the quartet’s first full-length Smeared, kept coming up. Why?

It could have been the extended rap version of “Left of Centre” that started off the show and contained a timely Kris Kros nod with crowd suggesting, “Warm It Up Chris” to Sloan’s Chris Murphy.

It might have been the set closer, an inspired version of Bad Brains’ “Right Brigade.” Or it could have been the energy of a crowded room where it seemed like absolutely everyone was stage diving and going nuts for Sloan, the city’s biggest band.

“That show and that era, it was a pretty exciting time for us,” says bass player Jay Ferguson. “All the attention, being signed by Geffen, going to Europe and playing sold-out shows.”

If there was a perfect time to see Sloan in Halifax, it was then.

Whether it was Stereolab at the very first Pop Explosion, Monotonix climbing telephone poles and performing Halifax’s first ever drum kit surf, The Mooney Suzuki replacing an MIA Brian Jonestown Massacre and re-dubbing themselves the Charlie Watts Riots or local bands playing the festival for free so that organizers could afford Yo La Tengo, the festival has had a number of memorable shows. Other highlights have included Pansy Division, Les Savy Fav, K’naan (a show that Waye Mason calls “transformative”), Arcade Fire, Elliott Smith, Jay Reatard (no punches thrown), Chixdiggit and Trans Am. With 948 bands playing every fall since 1993, the Halifax Pop Explosion has left an undeniable mark on the city.

Right down the street and seven years after the Fugazi show, Buried Inside played to a packed living room due to lack of proper all-ages venues. “I Want to Get Evicted” was heard right before the band played. The tenant nearly did.

The cover of Mock Up, Scale Down might just have the best cover artwork of any album to come out of Halifax, but it’s the Slide Show---an album SuperFriendz bassist Charles Austin calls their “prog record”---release show that finds its way onto our list. Showgoers were told to dress up in attire fit for a ballroom. Our “Scene and Heard” columnist Stephanie Johns wore a tiara: “I remember Rich [Buck 65] was wearing a pair of jeans with ‘solid gold’ embroidered on the back pocket...and taught everyone this dance called The Range Rover. Rich started ballroom dancing by himself, trying to get someone to dance with him, but no takers. That could have been because everyone in the front was under 17 and maybe a little intimidated. I definitely liked those jeans though. And The Range Rover is a dance I still pull out to this day.” The SuperFriendz, not to be outdone, looked great in their suits and ties and played to one of the best-dressed audiences in Halifax. 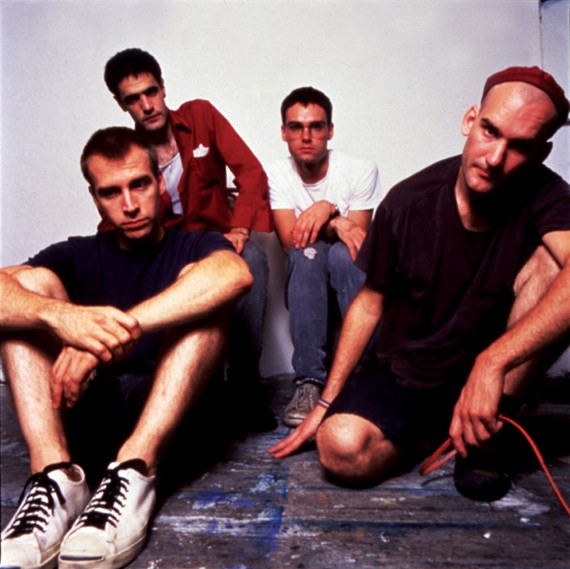 with Equation of State and North of America

One of the perks of promoting a Fugazi show is being able to have dinner with Ian MacKaye, as Angie Fenwick Gibb discovered. “This was particularly thrilling for my husband, Cliff, a fanatical fan of Minor Threat and Fugazi,” says Fenwick Gibb. “He kept saying afterwards, ‘I ate sushi with Ian MacKaye!’ I’m sure if we weren’t already married, that would have sealed the deal!”

Fenwick Gibb’s co-promoter, Colin McKenzie, explains the importance of Fugazi coming to Halifax. “We took the organization to another level but used all the great skills we had acquired running those events. Today there are a few promoters who have been bringing in some great stuff but not so much back then...what made Fugazi really great was that it blew everyone’s mind that they would actually be playing in Halifax. They were legends and influenced anyone who wanted to be a puck rocker....The band had so much credibility and had created such important music as well as started a great record label, the fact that they would be playing in Halifax---which back then felt like the ends of the earth as far as touring rock bands were concerned---was too good to be true.” 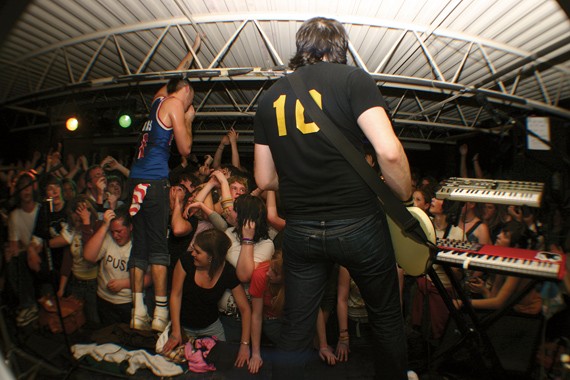 Every time they played, the crowd was larger than the time before. In May 2005, DFA played a sold-out Attic gig and then followed it up with a sold-out show at The Pavilion that saw over a hundred would-be audience members turned away. Fire codes were close to being breached and sweat poured from the walls.

Back before screamo was synonymous with terrible, Alexisonfire played a sold-out show to an all ages crowd at the Ceildh Connection. The line-up for the show was so long that the band did a second set for all their fans who couldn’t get into the first. 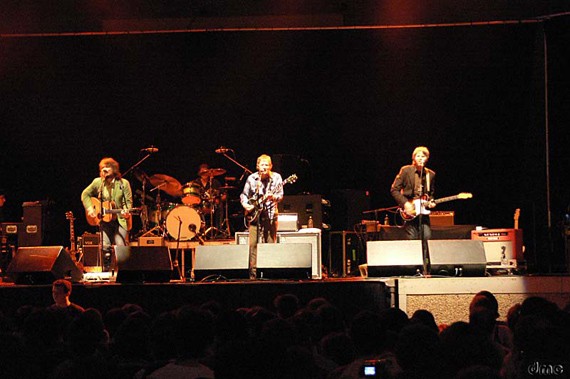 This show, at the outset, gave no indication that it was to be any more memorable than any other Wilco performance. “While I couldn’t fault their performance,” says blogger Iain MacLeod, “The band wasn’t very talkative early on in their set. They seemed to be going through the motions until a slow, melodic train ended up passing by Alderney Landing as they were performing one of their posthumous Woody Guthrie collaborations, ‘Airline to Heaven.’ It was at that moment they perked up and began to acknowledge the crowd as well as the perfect and seemingly planned moment.”

Promoter Waye Mason agrees. “Sun setting, boats with fans anchored watching, a blue sky and perfect weather Jeff Tweedy was in a joyous mood. The train goes by in time to the Woodie Guthrie tune in the encore, so perfect I had a dozen people ask if we arranged for the train. A perfect peaceful day.”