But Dalhousie professor Chris Cutler has some tips to make it better. 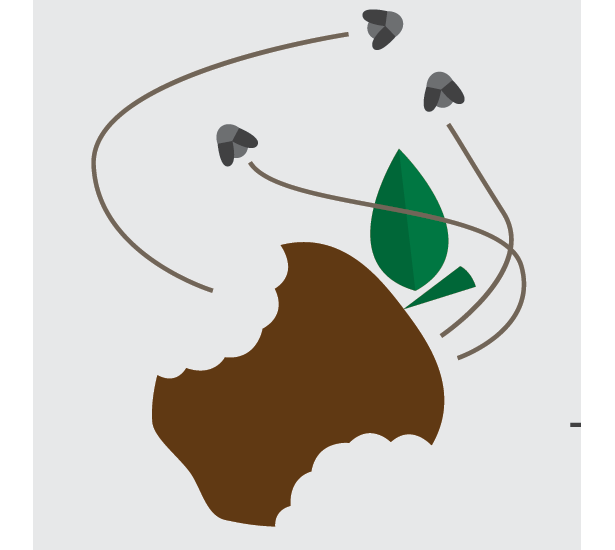 It’s summer in Halifax. It’s hot. One morning you wake up and can’t even recognize your kitchen. It’s swarmed with what looks like hundreds of fruit flies. They’re on the ripened bananas you bought yesterday, in your compost bin and on the wine glass from last night. You try to swat them with your hands and they disperse everywhere. Two weeks pass and they’re multiplying faster than you can trap them.

How did they even get there in the first place? When will it end?

Chris Cutler, a professor at Dalhousie’s department of Plant, Food, and Environmental Sciences says it probably started when you bought fruit at the grocery store and inadvertently brought “lots and lots of eggs” into your home.
Fruit flies are naturally attracted to the scents ripe fruits produce, and even better for them is overripe fruit.

These flies can lay up to 2,000 eggs in a day. And wherever there’s rotting food in your kitchen (or at the grocery store) there are probably fruit fly eggs breeding there. Give them a few more days and they’re flying around your kitchen. “They reproduce really quickly,” Cutler says. And because of their small size, they require little very resources to survive. With this in mind, Cutler says "if you buy green bananas, it’s less likely that you’ll have fruit flies on them.”

And fruit flies are not all bad. “The very same fruit flies that are a pain in your butt in your kitchen are the same ones that people—thousands of scientists all over the world—keep in labs for genetic research,” says Cutler.

Assistant professor in the department of Microbiology and Immunology Francesca Di Cara agrees with him. She says these flies have contributed to some of her research, like looking at oxidative stress and hormone production in humans. “They have contributed a lot to our knowledge in medicine,” Di Cara says.

Though not all researchers use the fruit flies found in kitchens. Di Cara says some researchers like the ones at her laboratory use modified ones. “The Drosophila we have in the laboratory, they have been inbred for many generations,” she says.

But since we’re not all scientists and don’t need fruit flies for research, how do we get rid of them?

Cutler says the best way to prevent them is cleanliness: Be quick to wipe down any spilled drink or food residue; take that bowl of overripe fruits off your counter; take out your organic waste and clean out your trash can while you’re at it; keep your compost in the freezer; wash your fruit when it gets home from the grocery store and if you can afford to in the heat, keep your doors and windows closed. And because keeping them out is nice in theory but nearly impossible in reality, it’s good to know how to get rid of them, too.

Cutler recommends pouring some wine or apple cider vinegar into a container, adding some dishwashing soap, covering it with a saran wrap and puncturing some holes on it. “And the flies will be sure to go in there,” he says.

The most important step is adding the dish soap. “These insects are so small and there is a surface tension with water,” says Cutler. “They’re able to kind of walk on the water,” but dishwashing soap breaks this surface tension, trapping the flies in the liquid and keeping them there. You’re welcome.