Coming to screens soon, these local productions are highly anticipated. 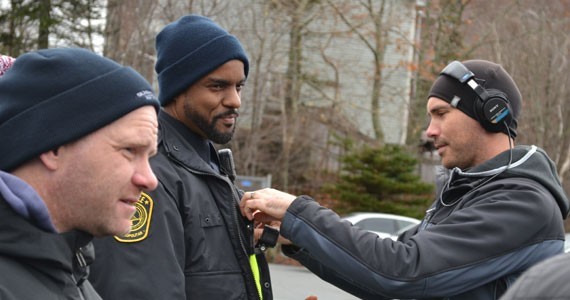 Black Cop (feature film) White police officers mistreating black civilians—it’s a story we're now too familiar with. But imagine the outrage if a black cop was mistreating white civilians! Cory Bowles sets up this premise in his short film Black Cop. It played at this year’s Atlantic Film Festival and it punched me in the gut. It stuck with me for days and I can't wait to see what he does with the feature film version.

The Mist (television series) Once again Nova Scotia serves as a backdrop for some creepy things that came out of the deep dark mind of Stephen King. It shot here for several months, put a lotta people to work and sounded like it was a hell of a fun time. And it's always fun to see our home province on screen—even if it’s dressed up like Maine.

Halloween Party (feature film) Director Jay Dahl knows how to scare people with his creepy movies and I'm sure this will be no exception. There are some familiar faces here and some familiar locations. And if you get yourself into the after party, whenever and where ever it is, I'm sure it'll be a hoot.

East Coast Fame Game (working title) (documentary film) Jackie Torrens is making another documentary film and that means—no matter what it's about—I’ll be first in line to see it. Two people in their 50s work their day jobs, then, after work, they slip into their nighttime personas. It's an examination of our need for dreams. And most of us "creatives" know that without a dream to work toward we probably wouldn't get out of our beds in the morning, amirite?

The Crescent (feature film) Director Seth Smith is an artist in the truest form. I want to crawl into his brain and see how his mind works. He and his wife and business partner Nancy, and their adorable little boy made a feature film together this year. Knowing Seth—and how his other work has stuck with me for days (and days and days)—this is my most anticipated release of 2017.

Stephanie Clattenburg is a film writer and director based in Halifax NS. Her interests include film, music, television, radio and time travel.