Things change. In the first Best of Food survey in 2002, for example, there was no Best Lunch Specials category. Similarly, 10 years ago there was no such thing as Fid Resto---simply called Fid, the fine dining restaurant was all a big winner in the inaugural Best of Food. Through 10 years of the survey it has been a steady presence, winning all manner of accolades as Fid and continuing to win after the 2009 renovations and re-reinvention as Fid Resto. 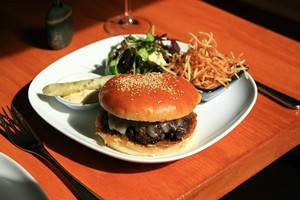 (By the way, the shakeup successfully shucked Fid's rep as a high-end place where you only went for the fanciest of dinners. During the renos, owner-chef Dennis Johnson told Shoptalk that Fid was getting a “super accessible and super comfy” new interior. As evidenced by the once-radical idea of Fid winning the Best Lunch Specials prize, that accessibility ethic has trickled down into the menu, without compromising the great cooking at the heart of the venture.) A decade ago, when Johnston won his first Best Chef award in the inaugural Best of Food Paul, he told Coast food writer Heather Nicholson that his style of cuisine is minimalist. “Take one element in its prime, fool with it as little as possible, and accent it with two or three other elements. Food is simple. If you have top-quality products, it does it all by itself.” Luckily some things never change. First Runner-up: Dharma Sushi
Second Runner-up: Sushi Nami Royale