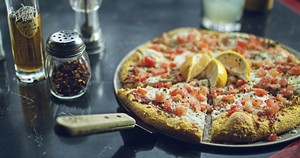 Editor's note: With its latest Best Pizza Pie win in 2016, Sal's was elevated to the Best of Halifax Hall of Fame.

Chris Cuddihy has been running Sal’s for 23 years, and winning Best of Halifax gold for his piping hot pizzas for most of them. “We opened up pre-Food Network, pre-foodie culture,” he says of the Hydrostone trattoria. “Before a lot of people thought we were gourmet, but it’s more that we’re purists. We do our style, New York Italian, and I think we do it right.” It’s no surprise that Cuddihy’s modelled the business with Montreal’s Schwartz’s in mind, because Sal’s biggest fans aren’t looking for a quick pizza fix—they’re happy to wait, mouths watering, for their pie to arrive. “We don’t take it for granted,” he says of the three generations of dedicated diners that helped to send Salvatore’s into the BOH Hall of Fame. “Favourite and best are two different subjects, but its nice to be so many people’s favourite. Our dream is for this place to be an institution.” Looks like dreams really do come true.