Editor's note: With his latest Best Political Cartoonist win in 2009, Bruce MacKinnon was elevated to the Best of Halifax Hall of Fame.

We reserve our Hall of Fame---a special honour that retires both the winner and the category they won in---for the iconic figures, people who have owned their title year in and out, who have made such a mark in Halifax that their names are indelibly linked to the work they do.

So, imagine our surprise when longtime Chronicle Herald cartoonist Bruce MacKinnon, well-known for years as a crack satirist, admits that this past year has been crazy not because of drawing but because of his burgeoning music career.

"I've been playing music more than ever," he says. For years he was what he calls a "professional sub," playing with friends in bands whenever they needed a guitarist. In the past few years he's been playing solo, mostly bar shows doing acoustic covers mingled with a few originals. More recently he's been doing gigs with his son, playing as the duo Bruce & Jay, with Jay doing backing vocals and drums. A regular Saturday afternoon stand at The Elephant & Castle is where you can catch them.

"The music is keeping me hopping," says MacKinnon. "It looks like this isn"t going to stop anytime soon." He adds, laughing, "I've never gotten hired for music because I do cartoons. That would be a lousy reason."

MacKinnon was raised in Kingston, Ontario, as well as in Halifax, Truro and Antigonish. There was a time when he had to choose between art and music. "I was accepted into the jazz program at St.FX," he says, but after trying it out he wound up at Mt. Alison where he studied Fine Arts for a year, eventually transferring to the NSCAD graphic design program. That led to freelancing for the Herald, starting full time in 1986.

"I was terrified at first," he recalls. "I was kind of sweating doing one cartoon a day." He asked for a little elbow room that the Herald gave to him: just three cartoons a week. It turned out he didn't need it, he was able to produce one cartoon a day from the very beginning.

"You have a deadline at the end of the day, and it forces you to get the job done," he says, though he admits it's a double-edged sword, that the time constraints can sometimes hamper the quality. But he says as long as the concept is sound he feels good about the outcome.

"It's been 23 years," he says. "A lot of the time the greatest challenge is to do something original. The creative mind works in patterns, based on your general knowledge. Pop culture references can be a way out if you can use them, because by their very nature they're fresh." 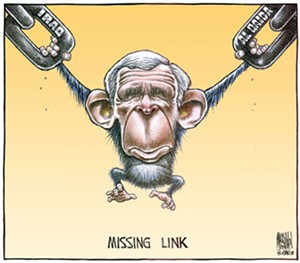 This controversial cartoon ran in the Chronicle Herald in 2004, winning 2nd place at the World Press Cartoon salon in Portugal in 2005. "It got a little negative feedback from readers' when it first ran," says MacKinnon, as well as some letters of support. When it was reprinted at the end of 2004, it earned a host of angry letters. Keep in mind that Bush and the War in Iraq still had plenty of love at the time.

"It was very frustrating for me and a lot of Canadians," says MacKinnon about the war and Bush's ability to sell the connection between Al Qaida and 9/11 with Iraq. "They managed to convince Americans that there were weapons of mass destruction. From a perspective outside America and from the rest of the world, everyone was watching and thinking, 'How can they believe this?' It seemed so stupid to me."

MacKinnon hit upon the basest image he could think of, the simian-faced Bush as a primate ancestor to humans to best illustrate the president's need to wage war as the only connection between America's enemies.