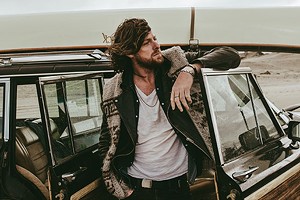 It’s a good time to be Matt Mays—two Best of Halifax wins and a brand-new record, Once Upon a Hell of a Time (released on your gold record label, Sonic). That’s where his focus has been most of the past year, which he calls “transitional,” partly due to a move to Toronto. He co-produced the record with Wintersleep’s Loel Campbell, and it took the traditional couple years. “It’s all relative. It didn’t take long for me, this is how long I take to make records. It takes me awhile,” says Mays. “I have to travel around and do stuff, so I have stuff to write about.” Though he’s away from his beloved Atlantic Ocean now, it’s a quick flight, especially for a town that’s supported him for 20 years. “I used to play a lot of open mics in front of nobody, so I never get used to the support and the love I get,” he says. “It never gets old and every year it feels even better, even more of a tighter, warmer hug.”