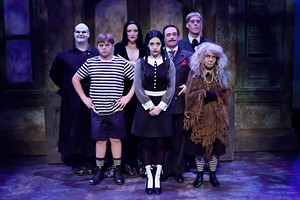 The Addams Family’s entertainment juggernaut began to grow as a cutesy (black and white!) television series in 1964, then a few movies in the ’90s and, five years back, a Broadway show. Halifax kept the enduring Addams love going with Neptune’s season-closing production in May. “I think people were drawn to it because it was lots of fun and it managed to be nostalgic, totally new and sophisticated,” says director George Pothitos, who is also Neptune’s artistic director. “For me, it was a great joy to put together. Talented actors who sing and dance along with a great production team came together to create an original Neptune production, the first all-Canadian cast of the show. I endeavoured to infuse the production with as much laughter and special effects to rekindle not only our memories, but also celebrate how much fun a theatre experience can be.”