While the rest of North America moves towards decriminalization of marijuana, the Nova Scotian justice system continues to prosecute with gusto. 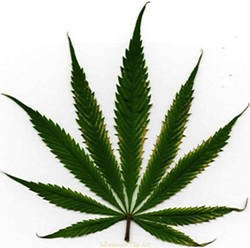 Two US states are decriminalizing marijuana in response to ballot initiatives, and there’s a significant move to decriminalize pot in British Columbia. But here in Nova Scotia, the justice system is still prosecuting pot crimes as if it were Nancy Reagan’s America. It doesn’t matter that the vast majority of people---some polls place it as high as 70 percent---either have or continue to use pot, or that pot causes fewer problems than the perfectly legal alcohol or that in all probability pot will be decriminalized even in Nova Scotia in the near future.

Twenty-eight of those arrested face 97 charges, all related to growing, distributing and selling pot. The RCMP also seized 45.5 pounds of dried pot, 2,207 plants, about $250,000 worth of growing equipment, over $100,000 in cash, five vehicles and four long guns. While the guns were paraded in a news conference, none of the charges relate to the weapons.

In a news release, the force said the arrests involved 120 police officers and an 11-month operation. The arrestees will be in court on March 13. While the RCMP won’t say how much any police operations costs the taxpayer, the cost of this pot bust plus the subsequent court actions will certainly be significant, and the cost in terms of disruption to the lives of those arrested will be incalculable.

Typically, those arrested for growing pot are not very high profile, and have limited resources to wage legal challenges. The most recent arrests, however, involve some prominent citizens who by all outward appearances are living prosperous, productive lives. They include:

Tyler Rutledge, of Dartmouth, is the principal at St. Stephen’s Elementary School in the north end of Halifax. After Rutledge’s arrest the Halifax Regional School Board sent a letter to parents of children at the school explaining that there was no reason to believe the arrest was related to the school, but Rutledge has been suspended all the same because, well, just because. “It is important to confirm that your children are safe,” reads the letter. (See the letter here.) Cornered by Elizabeth Chiu, one parent told the CBC that Rutledge “seemed like a decent upstanding person,” using the past sense “seemed” because, evidently, someone arrested for pot couldn’t possibly be a decent person.

Ken Greer, Halifax, is a co-owner of the Hamachi Group of restaurants. Contacted by The Coast Tuesday, Greer said he’d have a statement Wednesday. Greer hadn’t released that statement by press time, but when we get it we’ll post it at thecoast.ca/bites.

Mihai Apostol, of Halifax, was a Romanian paddler who defected to Canada while competing in Dartmouth in 1989, and who represented Canada in the 1992 and 1996 Olympics. After his arrest, the CBC noted ominously that “Apostol has dropped out of the sporting scene, which is unusual for an ex-Olympian,” implying, perhaps, that pot, rather than disinterest or employment, was somehow associated with this supposed fall from grace.

Roger Stubbs, of East Preston, was the coach of the Eastern Shore Minor Hockey Association midget AA team. After the arrest, Stubbs’ affiliation with the team was removed from the ESMHA website, but it remains in a google cached version of the site.

Although not listed in the RCMP press release, Halifax doctor Dinesh Sinha was reportedly also arrested, allegedly for selling prescriptions for medical marijuana.

The others arrestees range in age from 23 to 62. None of the allegations against them have been proved in court.