Bike route to be rerouted? 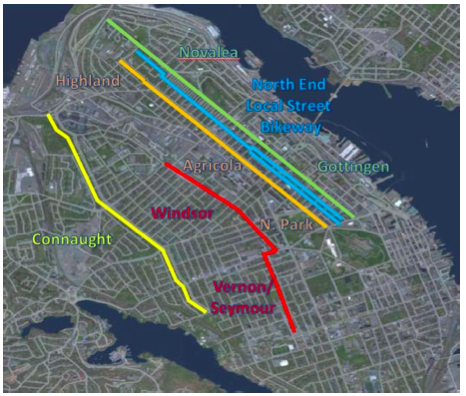 City staff wants the proposed cross-town connector re-routed, with bike lanes installed on both sides of Windsor Street. This means the single, connected bike route uniting the north and south ends of Halifax would link Windsor, Vernon and Seymour Streets for cyclists.

The original proposal, in November 2010, named Agricola Street as the best option for the connector. That routing would require the removal of 75 percent of the on-street parking spaces on Agricola, which angered many of the owners of businesses along the street.

“In terms of layout Agricola is arguably the best route,” she says.

One of Moz’s primary goals is blending business with residential.

“Bikes create vibrant communities, as a business that jives very well with me,” she says.

Moz is aware of the parking concerns of the Agricola route, but says the cross-town connector can help the situation by making other modes of transportation more palatable.

The final decision whether to install a bike lane on Windsor Street will be made by regional council later in the summer. The staff report has been submitted to the Active Transportation Advisory Committee and will be considered at its May 16 meeting. The public is welcome to attend these meetings.

The revised cross-town proposal brings problems of its own. Because the standard width of a bike lane is 1.5 metres, the new recommendation for the CTC will make on-street parking north of Welsford Street no longer possible. Vehicles will be allowed to stop in the bike lane to load and unload, but otherwise only the existing accessible parking spaces will remain.

The Halifax Cycling Coalition doesn’t like the proposed Windsor routing of the cross-town connector.

“From the beginning Agricola has been our preferred route for many reasons,” says Matt Neville, a coalition member. “A number of cyclists already use that route. It can’t be beat!”

Neville says that from a destination point of view, the lack of hills and the fact that there’s currently no buses makes Agricola the best location in all of peninsular Halifax for the connector. He also believes it’s the safest for our two wheeled friends.

Jennifer Watts, councillor for the north end, says no final decision has been made on routing for the CTC.