How Bill became law: While you enjoy alFresco filmFesto’s Summer of Murray, here's a look at the rest of Bill Murray’s work 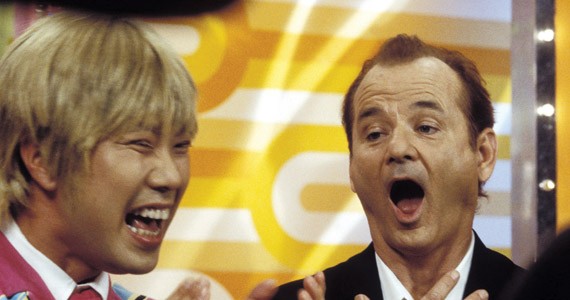 Bill as Bob in Lost in Translation.

Bill Murray has always seemed a comedic actor ahead of his time. His ironic, knowing detachment and effortless cool made Caddyshack, Ghostbusters and Groundhog Day blockbuster successes. The movies are all screening as part of alFresco filmFesto's series of his most-beloved work, beginning Friday with Meatballs.

What's so impressive about his career is he's never been one to go the easy or predictable route, and yet has had many more successes than failures. Murray broke out of Saturday Night Live with a refreshing lack of star ego, meaning he's never been afraid to take a risky lead or an unorthodox support or cameo role if it suits him.

For example, long before Johnny Depp essayed Hunter S. Thompson in Fear and Loathing in Las Vegas, Murray took a crack at the legend of the Gonzo journalist in Where the Buffalo Roam in 1980, a scattershot attempt at turning Thompson's stories into comedic adventure. A lot of it doesn't work, but there are inspired moments, mostly as a result of Murray's talent.

That watchability made his first few comedies---the hilarious military goof Stripes among them---big hits. Murray earned stellar notices as Dustin Hoffman's roomie in Tootsie, though he's barely in it, but he makes a great movie better every moment he's on screen. His popularity meant that his name attached to a project often gets it made. One of Murray's passion projects was 1984's The Razor's Edge, a dramatic turn bankrolled by the studio when Murray agreed to do Ghostbusters. The second cinematic adaptation of the W. Somerset Maugham novel, it shows Murray's ambition to do more serious material. Unfortunately, his familiar detachment makes it hard to buy him in an earnestly serious piece about a man seeking spiritual enlightenment following World War I. It's been reported that the film's box office failure prompted him to leave Hollywood for Paris with his family, though he eventually came back and had a hit with Scrooged.

Well-worth seeking out is Quick Change, a dark comedy Murray co-directed and produced in 1990. In it he's Grimm, a guy who robs a New York bank in a clown suit---coming into his own as a brilliant and fearless bank robber after years of being an anonymous city worker---then has a hell of a time getting out of the city with his cohorts, Geena Davis and Randy Quaid. The curmudgeonly clown is a perfect role for Murray, predicting his later-career roles.

Two pictures from the '90s massively enlivened by Murray's appearance in supporting parts are Tim Burton's biopic Ed Wood and the Farrelly brothers' bowling epic Kingpin. In the former, Murray plays real-life actor and drag queen Bunny Breckinridge, covered in powder and as camp as can be, while in the latter he's gloriously sleazy bowling champion Ernie McCracken, sporting a hideous combover.

Also worth a look from the period is Mad Dog and Glory, where Robert De Niro's regular joe runs afoul of Murray's gangster with Uma Thurman stuck in the middle, though one can't help but think it would have worked better if De Niro and Murray had switched roles.

Rushmore is part of the alFresco series, and was Murray's first film with American indie director Wes Anderson, with whom the actor has shone in five films so far. Anderson's self-consciously awkward family tales perfectly suit Murray's disposition and shows off the pathos in his craft. My vote for his best Anderson is the Jacques Cousteau-inspired The Life Aquatic with Steve Zissou, an ensemble piece with Murray as the revenge-obsessed, crusty father figure. The film polarized audiences, but it rewards multiple viewings.

It was Sofia Coppola who gave Murray his career-best role as Bob Harris in Lost in Translation---a lonely Hollywood star shooting a whiskey commercial in Tokyo who strikes up a chaste romantic liaison with a photographer's wife, played by Scarlett Johansson, while both are stuck at the Park Hyatt. Coppola's script allowed Murray to underplay the part to perfection, earning him an Academy Award nod for his efforts.

Murray continues to do great work, in Jim Jarmusch's drama Broken Flowers and last year's Get Low. And he still isn't above the odd supporting role or cameo, as when he played himself in Zombieland. Typically wry, when a bloodied and dying Murray is asked if he has any regrets, he responds with, "Garfield, maybe."