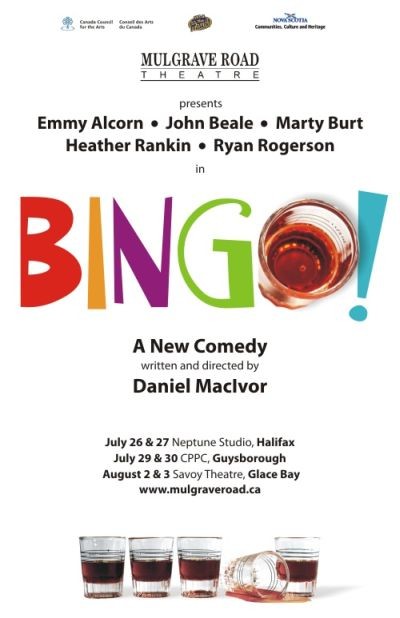 The starting point of Bingo! is not all that original—-five friends reunite to share memories, secrets and rivalries on the eve of a high school reunion —-but in the hands of wordsmith Daniel MacIvor, a stock premise becomes an absolute delight. His cast of characters is quirky and complex. Marty Burt is “Dookie” a self-important, misogynistic windbag who, refreshingly, is not redeemed by the end of the play. Emmy Alcorn is the tough-talking- but-good-hearted “Boots”, a woman whose butch demeanor and appearances gives people the wrong impression. Ryan Rogerson is “Heffer” a man trapped in his own life and going nowhere fast. Added to these are John Beale as “Nurk”, a shy, sweet and damaged engineer and Heather Rankin in a star turn as “Bitsy”, a middle-aged woman with all the grace (not to mention the eyes) of Bambi on ice. These five very specific characters manage to touch on issues that will speak to most everyone, giving this laugh-a-minute comedy both heart and depth.