Dark and occasionally harrowing, Jason Buxton’s Blackbird tells the story of a frustrated teen in an even more neurotic community. 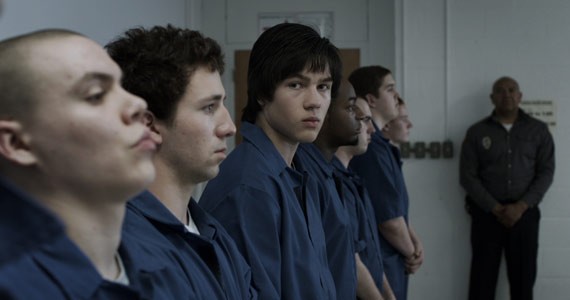 Sean is 16 and a goth. He's the new kid in a small-town school, where the hockey team rules the roost. When he starts to get some attention from Deanna, the girlfriend of one of those jocks, he gets bullied and lashes out the only way he can: online. When the cops come down on him for the things he writes and the texts he sends, it doesn't help that his father's an avid hunter and improperly stores his firearms.

This is the premise for Blackbird, Jason Buxton's first feature film, shot in Windsor in the spring of 2011. It's a dark and occasionally harrowing look at teenage emotion and miscommunication in the age of omnipresent connectivity, playing at last week's Toronto International Film Festival and this week's Atlantic Film Festival.

When Buxton was a teen, he remembers his friends---classmates---making death-threats to each other all the time, a fact of life in the sometimes-grim emotional landscape of high school hallways. "But it didn't get recorded as computer forensic evidence," he recalls. "We don't know the true intent of an individual who acts out this way."

Buxton's script was inspired by research for a documentary idea, where he looked at teen violence and the Young Offenders Act. It was an eye-opening experience. "Young people really don't have champions, especially in rural areas," he says. "Teens from disadvantaged backgrounds in particular need that. Our system, I found it not advantageous for teens in that way."

But as much as Blackbird takes the side of the sullen Sean, played by Connor Jessup, it's easy to see why the adults in the community get up in arms, especially given the media frenzy that always surrounds any kind of violence in schools, from Columbine on. Buxton isn't insensitive to that perspective, especially as he's a parent himself.

"In a lot of ways I identify with members of the community," says Buxton. "If there's a point in terms of my political position it's that we're collectively losing the ability to discern case by case. Let's not build a neurotic argument by piecing together various fragments of this guy's identity and behaviour to create meaning.

"It's interesting to me because that's what film essentially is as well. You put two shots together to create a third meaning. We're hardwired as human beings to create narrative, to make sense of things. This could be dangerous. That's what I was looking at."

Though Buxton moved to Nova Scotia from the UK when he was nine, he says none of what wound up in the movie was particularly inspired by his own experience.

"I was bullied a little bit because I spoke with a British accent," Buxton says. "I was different in a very obvious way. There's adaptation; one of the reasons why I lost my accent pretty fast. But I certainly relate to Sean as a creative person, and as a bit of a reactive person as well."

Buxton had previous experience as a camera assistant and directing short films, and one of the lessons of making shorts he took to feature filmmaking was to cede a certain amount of control to his cast and crew.

"I had a couple of experiences on shorts where I learned lessons by being the Stanley Kubrick-type," he says with a chuckle. "When I made the feature I realized what I needed to do was create an inclusive environment. I needed as many creative collaborators as possible, not to micromanage. Luckily the script drew great talent, so that makes the process of directing much easier."