Blue Mountain-Birch Cove Lakes a "sham of a process"

Report on the wilderness area's development receives intense backlash from the public. 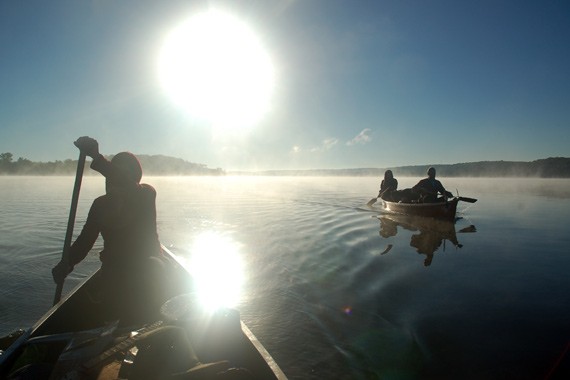 Hundreds of people crammed into a tiny meeting room at the Lacewood Future Inns on Monday evening to hear a presentation on the proposed plans for the Blue Mountain-Birch Cove Lakes wilderness area. It did not go well.

The crowd—which filled the conference room and spilled into the hallway and lobby of the hotel—was eager to voice its opinions on facilitator Heather Robertson’s recent, controversial report on the proposed boundaries of the region. But no questions were allowed.

Many stormed out, boos were consistently hurled and heads shook in doubt as Robertson attempted to justify her reasoning for siding with private developers to allow a sprawling suburb to be built on land that HRM has been trying to buy and protect for years.

“This plan has not been held publicly in a way it should be. We should have consultations,” said District 12 candidate Richard Zurawski after the meeting. “I’m very disappointed in this tonight, there’s absolutely no process for feedback here.”

The conclusion from the evening is that after a decade of planning the Blue Mountain-Birch Cove Lakes area, the municipality has failed to keep its promise. “It’s maddening,” says Raymond Plourde, wilderness coordinator for the Ecology Action Centre. “We’ve worked for so long to get this province to designate the wilderness area and the city has done nothing but allow this sham of a process to continue.”

Back in 2006, the municipality approved the creation of a public wilderness park in the Blue Mountain area, behind the Bayers Lake business park. In 2009, Nova Scotia’s government declared 4,300 acres of land within that area as legally protected under the Wilderness Protection Act. The municipality has been trying to finalize the boundaries ever since.

Yet private landowners are affecting the original vision of the proposed park. The Stevens Group and the Annapolis Group own roughly 1,300 acres within the park area that they want to develop into a subdivision.

In order to create the park and protect it from this heavy infrastructure, HRM would have to buy out the owners at a cost of $6 million, according to Robertson’s report. The municipality’s appraisers price the property at $2.8 million. “Setting the regional park boundaries as proposed by the landowners in the Development Plan achieves regional park objectives and is economically feasible,” claims Robertson in her report.

Environmentalists and community members alike are urging council to reject that recommendation in order to preserve and protect the biodiversity of the land. “The facilitator doesn’t acknowledge that this area is a key choke point for wilderness connectivity and these lakes are a valuable back-up source of clean, fresh water and further development is so damaging,” says Plourde, who had harsh words for justice Robertson’s decision.

“For her to suggest the city should consider whether it really needs so much wilderness area is not her job to lecture.”

Robertson advised the angry crowd on Monday that this was only the starting point of a three-to-five-year process, with public consultation in order to gain final development approval. But HRM residents can only  make written comments on the report and proposal plans until July 4 by emailing clerks@halifax.ca.

“We need to start thinking of green infrastructure as worthy of just as much investment as built infrastructure,” says Plourde. “We are the generation that has the information to see how important this wilderness jewel is, not a sprawling suburb to appease the councillors and wealthy developers who have failed the public on this.”