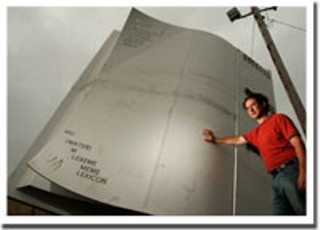 On September 28, as weary rush-hour travellers inch towards Pearson Airport along the congested Highway 401 in Toronto, their choice of scenery will no longer be limited to flashing rearview lights and gaudy electronic billboards , thanks in part to Halifax artist Ilan Sandler and Velocity, a Burnside machining and welding company.

Sandler, also director at the Centre for Art Tapes, is one of three artists whose work was chosen as part of a new public art initiative called Artstage. Conceived by Gerry Mahoney of Hillside Communications—also responsible for the topiary logos that line the nearby Gardiner Expressway—his latest highway beautification project will introduce hundreds of thousands of commuters to Canadian contemporary art. The first projects will be on display for three years, launched at a ceremony attended by Toronto mayor David Miller.

Selected from a short-list of 15 local, national and international artists, all with experience in mounting major public art initiatives, Sandler has been working on this project—a gorgeously rendered 3.5 metre-tall steel white book with a page torn, almost dancing away, from its red spine—since January 2006.

Sandler’s West Street studio is difficult to find, but once inside, there’s no question that it’s his workshop. A giant, blue upturned hand looks ideal for curling up in, or for giving someone a grand rude gesture. A fleshy, foam espionage ear that last year transmitted sounds from an outside wall of Saint Mary’s University to visitors inside the art gallery is retired onto a back wall. Sandler deals in the unexpected—giant lawn chairs, bicycles that ride power-lines through the sky, full-sized helicopters constructed out of plaster dinosaur bones—and in architectural constructions that bridge our physical and intellectual lives.

The book started on West Street as research, then a proposal and a paper model that fits into Sandler’s (real) hand; the cheapest way to play with proportions, and to recreate a book’s movements. Then foamcore and table-sized wooden models were designed and an engineer was consulted to ensure the real thing could withstand nature’s forces. In the early paper stages, Sandler, who has a Bachelor of Physics degree as well as his Master of Fine Arts, began discussions with Sean MacPhee at Velocity about how to fabricate the project so that it would remain true to his vision, and still be structurally sound. “There was never any question,” says Sandler, “that the book would be made here in Halifax and shipped out to Toronto. There’s no other way we could have done it.”

In his small office, steps away from the heat of Velocity’s welding shop, MacPhee doesn’t seem fazed by the large slabs of steel welded together to make the book’s pages, spine and cover. “We often deal with strange requests, so when someone comes with those ideas, we don’t automatically think that they’re crazy or out to lunch,” he says, although MacPhee admits most people are coming in for custom-made machines, not art. “He had an idea, we had the capability to do it, but we had to figure out how to do it and to make it look the same as what he wanted.”

Using a computer-aided design software program, MacPhee built 3D renderings of Sandler’s drawings. “He was able to figure out the geometry, it was all very complicated and unusual angles,” says Sandler. An impressive water-jet bed, which uses pressurized water and abrasive powder to cut computer-driven details out of steel, was used for the various sections before they were welded together like a 3D puzzle.

As cars drive past the runaway book, they will instantly recognize its shape. Those who are lucky to get up close will make out actual clusters of words, or their shadows, cut into the steel. It’s a high-concept tour of the history of the Latin alphabet, including Egyptian hieroglyphs, Phoenician letters and the syllabic sounds of early Semitic languages—the symbols representing various technological and architectural innovations.

The pages ripped from the book spell out another message: all of the words are associated in some way with the human body. “The words gain the freedom to be less constrained,” Sandler says. “Within the structure of a book, there are words that describe characteristics of a book derived from the human body. For example, the spine.”

A few words worth discussing as all those cars continue on their long journeys.