902Brewcast aims to quench your curiosity by bringing the people, businesses and stories behind the local industry to the airwaves. 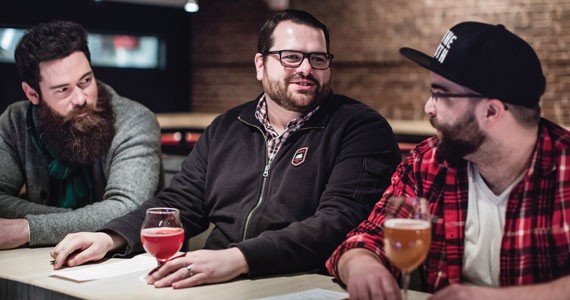 Plenty of Halifax beer-drinkers love knocking back local craft brew. But do they care about the stories behind the beverages?

Tony Wight had a hankering to start a creative project. What's more, he wanted it to focus on something he enjoyed: Talking about beer. His goal was to showcase the people and places "beyond the beer," and he thought creating a podcast was the way to go.

"I wanted to really focus it on the local craft beer scene, because really, it's kind of blowing up around here," says Wight.

Wight recruited his longtime friend Kyle Andrus as well as Phil Church, a local "beertographer" (seriously—look at his Instagram), to co-host the show. They've spent time listening to podcasts with a similar theme, such as the Chicago-based Good Beer Hunting. After some prep work and a couple test runs, 902Brewcast hit the internet in November.

Up until now, they've interviewed folks from businesses such as North Brewing Company and Good Robot, with the latest episode featuring the owners of Stillwell. The current plan of action is to continue chatting with local brewers and barkeeps, while also recording a "tasting session" every month. January's will highlight IPAs.

The trio agrees that, so far, the response to the podcast has been positive.

"I've been pretty blown away with the feedback and support we've gotten from people," says Andrus. "We've been having a ball."

Church's passion for beer comes, in part, from the friendships he's forged with people in the industry, and Andrus loves the social aspect as well. Wight is fascinated by the handiwork and the variety of tastes that can come from the same basic ingredients.

Since they're all beer enthusiasts, they may be biased—but the men say the podcast can appeal to people outside the beer-loving demographic. Anyone who likes to support local business or hear good storytelling can appreciate it.

"It's great to hear brewers and stuff tell their own stories," says Andrus. "It's one thing for them to tell you about: 'This is what we're making'...but it's kind of fun to hear them talk about what drove them to open the business."

Wight agrees, adding that even though every episode is about beer, the guests bring different personalities to the table.

902Brewcast usually holds its interviews on-site, right at the brewery or bar. On occasion, this, along with the sound equipment, has posed some challenges. But it's nothing the team hasn't been able to work through. For Andrus, going to the source is an important part of the show.

"We're really encouraging people who listen to go out and check out all these breweries," he says. "We can't really say that if we don't go do it ourselves."

They're planning to take things outside of HRM starting next week.

Brewcast's upcoming episodes include the IPA tasting session, along with an interview with Tidehouse Brewing Company.