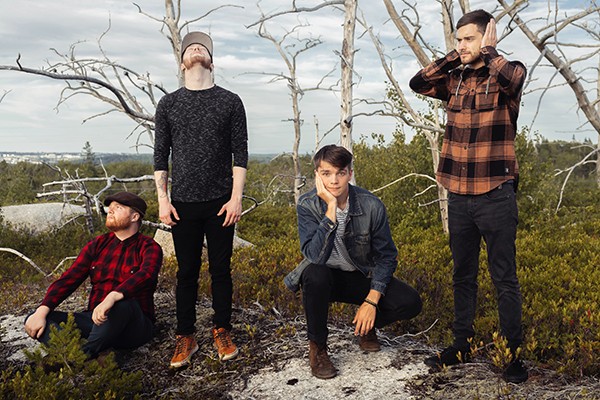 Braden Lam & The Driftwood people spent the summer in Halifax recording the band's sophomore album Driftwood People, a collection of "upbeat anthems worthy of long drives and high-fives," says Lam, where he sings for lost, missed and new connections. "It's kind of wild that it all just built up to this...but it definitely hasn't disappointed."

From songs like "Dawson City" to "Halifax Girl," Driftwood People's lyrics travel coast to coast. Moving across the country and away from his small town-Ontario home of Uxbridge "built up this feeling that I was really drifting through a lot of relationships and experiences in my life," says Lam. The album is a process of reconciliation for those relationships and experiences.

Now in his second year in Halifax, Lam does less drifting and more juggling. "I kind of say that school and music are both my full-time jobs," he says, "and I'm kinda working two of them right now." Lam's bandmates—Brett Chivari on drums, bassist Nick Pothier and pianist Jonathan MacKenzie—are also full-time university students. Their ability to work and get along so well as a band—and to perfectly share a large pizza equally—helps on the road and in the studio.

Their teamwork was tested right as the tour was getting started last month: On the road to their first show in Moncton, the band was waved down by a passing car. They pulled over to find their tire almost off the rim. "It was very bad," says Lam, "but we had a calm-down brainstorm sesh and got the tire fixed." The long drive ended in high-fives.

Braden Lam & The Driftwood People is celebrating its album tonight at The Carleton, just the fifth show of its first tour as a band.

"We're just having fun as we go along," says Lam, "and soaking up the experience as much as we can."