Instead of relaxing, the star “hit the jackpot” with his edgy role in Silver Linings Playbook. 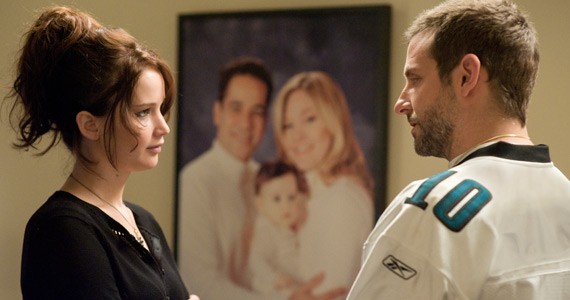 Jennifer Lawrence and Bradley (not Brad) Cooper rom-com it up.

Instead of relaxing into bland Hollywood stardom, Bradley Cooper tells Tara Thorne he "hit the jackpot" with the edgy Silver Linings Playbook.

Bradley Cooper is about as uninteresting a movie star as one could invent. Blandly handsome, he first gained notice as rich louches in Wedding Crashers and The Hangover, which made him famous and spawned lead roles in the likes of Limitless and The A-Team, popcorn pictures of little repute.

Like Chris O'Donnell and Jude Law before him, his pretty face and cocky swagger give him lots of coasting room in terms of a long leisurely ride to Hollywood obscurity, but Bradley—not Brad—Cooper wants to be taken seriously, goddamn you. It's evident even in his infamous appearances as an earnest student on Inside the Actors Studio, and can't-miss when seeing him at a Toronto International Film Festival panel: There's the obvious anger when the moderator asks if being named People's Sexiest Man Alive factors into the offers he gets now ("Is that a serious question?") and in how he starts many sentences with "As an actor...."

With Silver Linings Playbook, he's changed the game for himself, finally using his newfound clout for a challenge. Directed by David O. Russell—back in Flirting with Disaster territory after the more traditional (and excellent) The Fighter—Playbook stars Cooper as Pat, fresh out of an institution after he found his wife cheating. He's back at home with his parents, Jacki Weaver and Robert De Niro—also not coasting for the first time in about a decade—following a strict fitness regimen, a routine of therapy and positivity, all while plotting to get his wife back. It's an edgy, unpredictable performance in a gloriously messy movie, as Russell frames Cooper's manic face in myriad close-ups, chattering away, exploding intermittently.

"As you get to know each actor, you tailor it to them," Russell says, heading a table at the Bell Lightbox in Toronto in September. "I hate when I'm in the editing room and it's like I had an AK-47 and didn't fire every feature on it. I wanted to make sure I fired every feature."

"The beautiful thing about doing a David O. Russell movie is you're going to explore so many avenues on set," says Cooper. "There are a lot of things going on with Pat—there was a lot of modulation. We were learning as we were doing it."

The other half of Silver Linings Playbook is Pat's relationship with Tiffany (Jennifer Lawrence, who Skyped her audition from her parents' house in Louisiana), a young widow also battling mental illness, who reaches out to an oblivious Pat in a real attempt to recover.

"She was this onion," says a visibly uncomfortable Lawrence, a newly minted star thanks to The Hunger Games, and one who clearly does not thrive in the spotlight as her co-star does. "There were so many weird bizarre layers to her. It was about finding this girl and finding her place. Most of the time if the rest of the world doesn't accept you, you don't accept yourself. I can't imagine if the world doesn't accept you and you think you're fine. How depressing."

Part romantic comedy, part social commentary, part family ensemble—like Pat, Silver Linings Playbook has a loose grip on its self-image, though Russell contains the tone and makes it all work, even with a dance number at the end. And anyway, the director is clear about his goal: "This movie is about healing," he says simply. "You watch this guy go from one thing to another, and he's not a different person at the end of it."

"I feel like I hit the jackpot with this movie," says Cooper, all his grad-school-era enthusiasm on the surface, gesturing to Russell. "I can't believe this guy wanted me to work with him. My dream as an actor was to make movies like this guy makes."