The Montreal-based experimental popsters have had a hell of a year and thanks to Halifax Pop Explosion you get to be part of it. 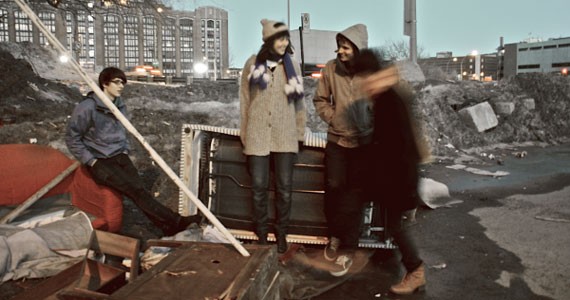 Imagine if buddies, and BRAIDS members, Raphaelle Standell-Preston, Austin Tufts, Katie Lee and Taylor Smith never decided to move their butts to from Calgary to Montreal. Their Polaris shortlisted experimental pop record Native Speaker wouldn't have been Native Speaker and, maybe, it wouldn't have even been on that list. "When we realized that we had all moved to Montreal for each other, we began to fully explore a very deep and wholesome relationship," says Standell-Preston. "As we began to feel more comfortable with each other, our writing developed a more complex, boundless and experimental feel. We could push each other and not feel awkward." In the short nine months since the record's January release BRAIDS has been steadily growing its audience, gathering nominations and rave reviews, touring like crazy and gaining momentum for what's to come. And Standell-Preston says, all that time on the road only makes the foursome tighter. "Tour has forced us to go deeper into understanding our songs, to find that spark that only we can feel from playing them so often." Happy HPX, start your fest by getting wrapped up in BRAIDS.

666 ways to celebrate Halloween 2021 in Halifax

What is Truth and Reconciliation Day and why is it important?