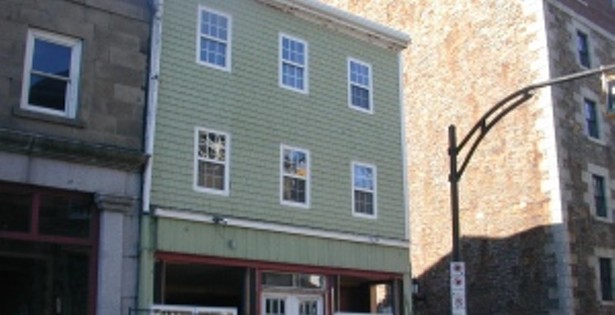 The oldest all-wooden building in Halifax is being taken down. I just took these photos of the Sweet Basil building downtown:While I was there, Phil Pacey from the Heritage Society arrived, and handed out a flyer explaining the history of the building. He believes that the building was constructed in the 1840s. City directories weren't published until later, but by 1864 there is reference to a "eating saloon, steam ferryboat wharf, Thomas Martin, grocer and liquor" at the site. Later directories mention a boarding house, a grocer, a tobacconist and a confectionist. From 1952 to 1974 it housed Tom's Lunch and coffeeshop.. In 1989 came Cafe Scanway, and in 1999, sweet Basil.Just before I left, Unni Simensen, the owner of Sweet Basil, arrived and said she still holds on the lease on the building until midnight tonight, but demolition was continuing despite her objections.The workers appeared to be removing all the doors, windows and fixtures of value, and then boarding up the building for the night. I'm guessing they'll need to block Upper Water street to actually tear the structure down, and that will occur tomorrow so as to not affect traffic.

Waterside CentreThe Sweet Basil building is one of five involved in the Waterside Centre proposal that was voted down by Halifax council last week. The history is rather complicated---the Sweet Basil building had been given heritage protection, but owner Ben McCrea managed to get the NS Supreme Court to revoke that status on what Pacey calls "a technicality."After that court ruling, McCrea applied for, and received, a demolition permit for the building. It was part of the larger Waterside project---from the start, he said he would tear down this building completely, and save only the facades of the other four buildings. When council voted against Waterside, there was no particular reason to rush through with demolition. Perhaps the building could have been part of a land swap that would have saved the entire block. I can only see the rush to demolish as an act of spite; McCrea's taking his ball and going home with it because he didn't get his way with council.None of this bodes well for the other four buildings. McCrea holds a demolition permit for the Imperial Oil building (housing O'Carrols), which the city has to act on within six months, and (according to Pacey) applied yesterday for a demolition permit for the others, which will have a year timeline for action.