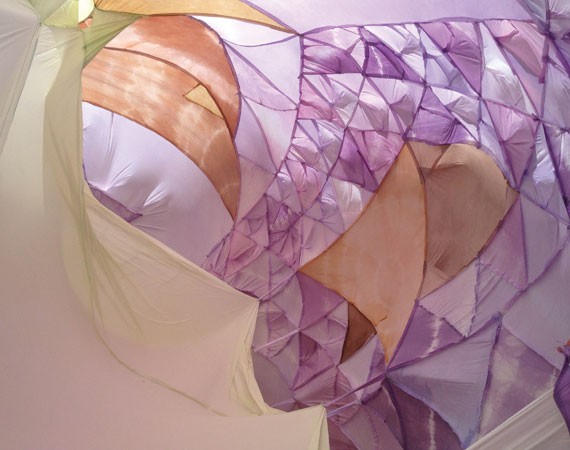 A festival within a festival, Breastival Vestibule is a temporary space that aims to break rules and help us reconsider how we use space. A soft, inflatable breast-like structure, it's the creation of Baltimore-based artist Rachael Shannon, who began the project considering the kinds of temporary spaces created at queer and feminist festivals and events.

The breastivals—currently there are two, the larger of which will make an appearance in Halifax—take inspiration from the idea of the "temporary autonomous zone," a space proposed by anarchist writer Hakim Bey, which exists outside of our ordinary use and rules of public space.

"When I was creating the breastivals, I was really thinking about how to create a different kind of private space in public, and how people collectively gather and experience their own bodies and what kind of shifts can happen when we create a temporary environment that can help us shift out of our regular ways of interacting," Shannon says.

The portable piece (requiring just a duffle bag for transport and a fan for set up) has been exhibited at numerous festivals and events—both queer events and more general art festivals. Though Shannon will sometimes organize workshops and events inside, at other times she sets up the structure "kind of as an experiment to see what people will do with the space," as she'll do in Halifax.

Those activities have ranged from singing, shouting, cuddling, napping and conversation. In the often overwhelming environment of a festival, the breastival can act as a refuge, or it "becomes what people are needing of the space," says Shannon.

"I think about what we learn about our bodies and ourselves when we take time away from the norms of our everyday life and I think that's something that queer and feminist and lesbian separatist cultures have done out of extreme need and out of that it's like an experimental space.

"Festival culture reaches across all sorts of identities, but I think some of the work queer and feminist cultures have done around fat activism, around gender and body place, a lot of that has been able to come from people separating themselves from environments and being able to reimagine themselves outside of cultural constructs of their bodies."