Brews you can use

by Francesca Handy and Allison Saunders 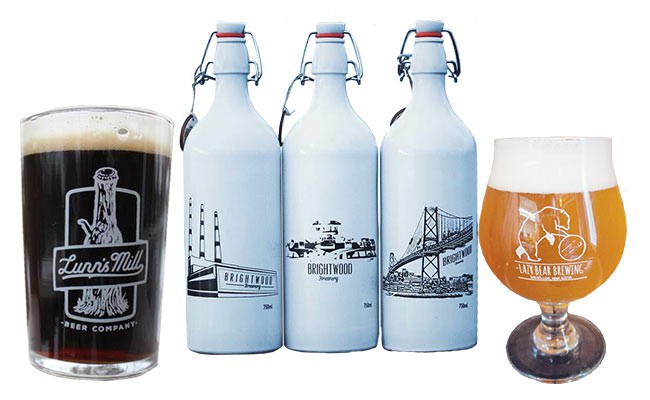 When Erin and Andy Norman moved to Smith's Cove after he got a job as an engineer, the couple started Lazy Bear Brewing so Erin would have work in the rural area. She picked up brewing while completing a master's in food science at Dalhousie. Before launching the business last May, she was hired along with her husband at Acadian Seaplants and the brewery became a passion project.

This weekend, Lazy Bear will be a stop on the Craft Brewer Association's Open Brewery Day on May 6. The public is invited to tour the hill-top property, including a small vineyard and hopyard overlooking the Digby Gut. Its beer will also be showcased during Battery Park's Horton Ridge Tap Takeover.

Erin, the brewmaster, says the couple's background in science and engineering inform many of their decisions when it comes to brewing. Each of their beers uses a different yeast. "I develop a lot of recipes around the yeast," says Erin. "I try to figure out what plays well with the type of yeast we want to use."

Busy with full-time jobs, the Normans brew their ales in small batches. Erin says this gives them more flexibility to experiment with recipes, as they aim to put out a new ale each month. The brewery has been a good way for them to stay busy and meet people in the community.

"Sometimes when we're caught up on work and we're just sitting down to watch some TV," says Erin, "we're like 'What would we do if we didn't have the brewery?'" —FH

Smack-dab in the middle of Middleton and Bridgetown, on "the beautiful side of the highway," is Lawrencetown— formerly known as Lunn's Mill—the home of the aptly named Lunn's Mill Beer Company. Like many craft brewery stories, this one's started with talented home brewers, Mark Reid and Sean Ebert were runners-up in a Boxing Rock competition that landed their white IPA brewed and bottled.

But it wasn't until the end of last summer that the pair upped the ante, and teamed up with two other friends, Chantelle Webb and Chad Graves, to create something of their own, in the Annapolis Valley. "We really thought we'd just be home brewing and amp it up slowly but next thing we knew we had some money in the bank and started purchasing equipment," says Webb, who brings both business and food savvy to the mix. Since opening in March, Lunn's Mill has been filling growlers once week (Thursdays) and doing deliveries (Fridays). "We sell out pretty much every single week. Sean, who's the full-time brewer, is here every single day pounding it out as much as he can and storing it away."

It's a small operation for now, with a roster of four beers, but Webb says they're currently waiting on a canning machine and have plans to, by fall, open a taproom. Following a Stillwell-like model they'll pour 10 beers, and serve fun, local-focused (Webb's planting a massive garden on-site), small shareable plates. This weekend the Lunn's Mill crew will be in Halifax, battling at Sunday's Stillwell Open craft showdown. —AS

Matt McGrail and Ian Lawson's plans for Brightwood Brewery were to go as nano as they could. "We wanted to take as little financial risk as possible. We were like, 'How small can we possibly make this?' I can't think of too many people that could have started with less money," says McGrail, with a laugh. "With our intuitive engineering background, our whole system is put together with plumbing parts."

Engineers by day, home brewers by night, the duo has been selling its growlers at the Alderney Landing Farmers' Market since last summer, aiming for a slow and steady rise. "Even in the 10 months since we've started I cannot believe how fast it's grown," says McGrail of the craft scene. "There's been a dozen that have popped up and some big names that have hit the ground running."

For now, Brightwood is comfortable at the market, and usually has three or four beers to offer (its new one, Halifornia Commons, launches this weekend), all brewed in a basement on Brightwood Avenue in Dartmouth.

"Our original plan was to kind of mimic Schoolhouse and FirkinStein—we knew that those guys were just full-time employees who did it on the side," says McGrail. "I started brewing because I was living in Newfoundland at the time, I went there for work and decided to pick up a hobby. The next thing you know a hobby becomes an obsession."

Brightwood will be part of Team Dartmouth in Sunday's Stillwell Open, as well as the Horton Ridge Tap Takeover this weekend at Battery Park. —AS