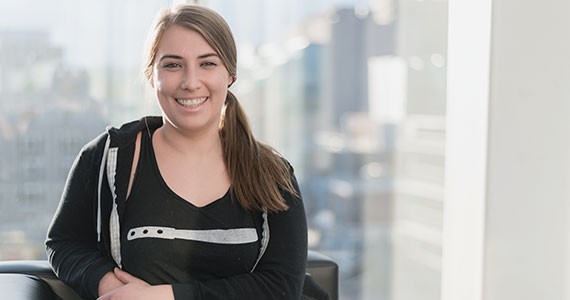 "It was about having good food, having good food supply and treating animals respectfully," says Brianna Hagell, butcher, local food advocate and proprietor of Vessel Meats. "People talked about it whole weekend—it being empowering."

She's just back from Grrls Meat Camp, which aims to unite, support, empower, educate and create a network for women "united by a common interest in food animals and meat." Hagell has been interested and invested in local food for years now, starting out by selling vegetables for Noggins Corner Farm. Then: "My mom came out to the meat shop I work at now to pick up our Christmas turkey," says Hagell, whose day job finds her at Withrow's Meat Shop in Belnan, outside of Elmsdale. "I started working there one day a week, and expressed interest in that I wanted to learn." She ended up trading on her background in business, telling her boss, "If I'm gonna be here, I wanna learn how to cut meat."

Hagell opened Vessel in 2014. It's a stand in the Alderney Landing Farmers' Market from which she sells local beef, pork and "occasionally lamb" most Saturdays. The name is not a meat pun. "Everything has vessels—your livelihood," she says. "Plants have vessels. Like a chalice, giver of life. In a broader sense, a bringer of life."

A butcher's life is not an elegant one, but Hagell's intent is. "It's hard on your hands, being in a cold environment. The meat gets in around your hands and makes them sore," she says. "All the organs come in a bag from the slaughterhouse and if someone wants a tongue, you have to go find a tongue. But for me, I decided I'm going to not not eat meat. I love bacon, I love meat. So if I'm going to eat meat, it's going to be the best. When I look at gross things in a bag, it's like—that's food. That's an animal's life, you want to be respectful of that."

On January 21, the day of the women's marches, Hagell flew to Texas—Calvert, exactly; in the middle of the triangle formed by Austin, Dallas and Houston, approximately—as one of 32 participants in the Grrls Meat Camp, running since 2011. ("If you're gonna go to a meat camp, Texas is the place to go," she quips.) The retreat took place on a 3,000-acre ranch called The Bar W, including butchers, cooks, chefs and farmers from across America (Hagell, the lone Canadian, notes they're looking for more at grrlsmeatcamp.com).

The activities were notably different from your average women's retreat itinerary. "They broke down a full pig. One really cool thing was I saw a woman de-bone an entire pig's head for headcheese," says Hagell. "There was a woman there from Alaska who goes out with the hunters and breaks down their game for them, she did a lesson on venison, how to deal with an animal that had been shot. ... We cooked everything we cut—meat sweats for days."

Hagell appreciated the networking element—like most Nova Scotia industries, hers is a small one—of Grrls Meat Camp as much as the educational opportunities. "Everyone knew different things. Mutual respect and learning and recognizing that a lot of people have had struggles to get where they are," she says. "A lot of people have had that experience. There was a lot of 'Look at all these really cool women, other people like me.'"

You'll be able to literally eat the rewards of Hagell's trip to Texas in the coming months as she infuses her cuts with inspiration gathered there. "I find it really empowering," she says. "When I was 20 years old I wouldn't even touch a chicken breast. Now I'm in control. I know what the cuts are. I know this animal's whole life. I control my food."