Cafe Brea is a sunny bit of brightness in Southdale, a small business serving homemade and local fare---with vegan and gluten-free options---that steers clear of the deep-fryer. 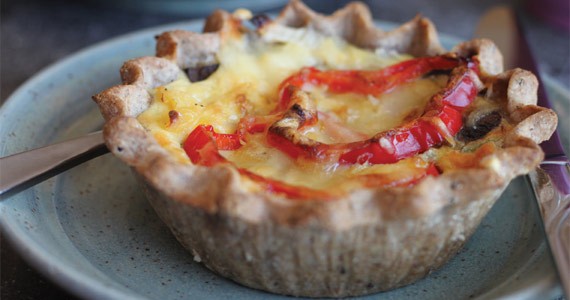 Here's the thing about Dartmouth: it isn't just the little triangle of streets caught up between Alderney Drive and Ochterloney Street. Sure, everybody hearts that part of Dartmouth, but where are the love letters to Woodlawn, Port Wallace and Portland Estates?

"Um, that letter must be lost in the mail," says everybody.

OK, not everybody. Obviously lots of people love lots of different parts of Dartmouth. And I bet the people who live in Southdale are feeling especially good these days. After all, in nearby Evergreen Place---a place where evergreens were doubtlessly bulldozed to make room for an incredibly necessary Pizza Hut---a sunny bit of brightness sits in the gloomy shadow of Penhorn Mall.

Though Cafe Brea looks like a tiny sliver of the plaza it's a part of, it's huge inside. The ceilings are very high, and the tall walls are painted a warm yellow that gives the big, stark room a welcoming air. A bank of windows at the front helps natural light extend far into the room. It's pleasant. There is a generous scattering of tables in the room, and soft music plays from a stereo that sits in a corner with some comfortable chairs.

The decoration is a little bit mumsy--- paintings of lighthouses and UNESCO Fresco-type scenes are on one wall, and word art that says "live it, love it, local" catches both my and my friend's eye. But there is also a slight modern bent to the decor, with chairs that have clear, red plastic backs. The small staff---there only appear to be two people working---stands behind a long bar. They are incredibly friendly, cheerily pointing out different lunch options.

The cafe is committed to using as many local ingredients and suppliers as possible. They make soup and sandwiches in-house, but also bring in sweets from places like Staff of Life, Sweet Hereafter, Schoolhouse Gluten-Free Gourmet and Made with Local. It seems like good sense in this decidedly deep-fried neck of the woods.

At the counter we try some of a peach smoothie doled out in sample cups. It's delicious: thick and creamy, sweet without an overwhelming sugariness. My friend Rachelle and I both order the soup of the day---a carrot and sweet potato puree---along with a curry chicken salad wrap and a vegetable quiche. Rachelle also gets a thick blueberry smoothie and I get a cappuccino, which is rich with velvety foam, made from the cafe's own organic, fair trade roast.

The soup is terrific---a tad salty, but I actually like the extra bit of salt with the sweetness of the base. It has a very luxurious texture, punctuated with tidbits of diced onion and coins of tender carrot. We both wish it had come with a fresh roll. A ceramic bowl would have also been nice---it arrives in a disposable bowl, oddly sitting on top of a lovely handmade plate from Tatamagouche.

The wrap is not bad, if a little too simple. It's a small portion of chicken tucked into a whole wheat pita. The chicken tastes fresh, but it's a bland mix. It was also delivered, along with the quiche, when we were almost done the soup. It would have been nice to get our entire meal at once, especially since the cafe was not busy.

The quiche is also OK, but very bland. It is bursting with tender bits of mushroom, onion and red and green pepper, and the crust is nice, but it is woefully underseasoned.

The menu is mild, and blandness seems to run through it, but the soup, smoothies and coffee are worth the trip. It's also nice to have vegan, gluten-free and fryer-free options in that neighbourhood. If nothing else, it will help your heart heart that part of Dartmouth.