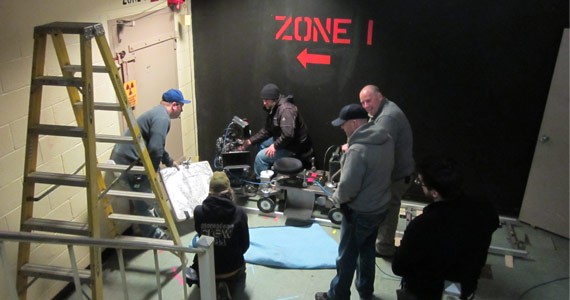 Daniel Campbell
The crew of Bunker 6 gets in the zone.

Rebecca Sharratt swipes away a bundle of frayed cables hanging from the ceiling, allowing her to walk further through the dark and ruined hallway.

"This part of the bunker got destroyed at the very beginning of the script," explains Sharratt, the producer on the feature film being shot inside a Cold War-era bunker in Debert, NS. Bunker 6 tells the story of 19-year-old Grace, who's lived in the loneliness of a fallout shelter her whole life. She's forced to work the bunker's machinery after her mentor, the bunker's technician, dies mysteriously. As she struggles to survive underground, her thoughts turn to the unknown world outside.

Sharratt and writer-director Greg Jackson filmed in the 64,000-square- foot facility for most of February. They won $115,000 last fall from Film Nova Scotia and Telefilm Canada last fall to make what will be their first feature film. The money helped them hire professional film crews and bring together a cast that includes Molly Dunsworth (Hobo with a Shotgun), Andrea Norwood and Jim Fowler. Jackson says they wrote the script with a budget in mind, trying to save money where they could.

But one place they didn't have to drop mad cash was the set.

Sharratt motions to a large room at the end of the hallway. Its walls are moldy and most of the green paint has chipped off. Greg Jackson stands beside her. "We didn't have to do any of this damage," he says.

The Debert bunker was sold last November in a tax auction to Jonathan Baha'i. Baha'i has been trying to fix up the place, but what he didn't fix became a blessing for Sharratt and Jackson, who expect the film to be ready for screening at the Atlantic Film Festival in September. "We had seen that parts of the rooms had been left to neglect and that is perfect for what we need," Jackson says. Sharratt was initially hesitant about how much some of the damaged bunker scenes would cost, but when she saw the bunker and its condition, "it was like numbers coming off the page," Sharratt says.

Jackson remembers his first impression of his new set: "Perfection. It was exactly what we were looking for. It's already right there and pre-destroyed for us!" The damage to the bunker is about as authentic as you can get, and so is just about everything else. Much of the original machinery and electronics remain underground. From massive generators to power monitors, complete with blinking lights and over-sized dials, the bunker plays the part of itself.

"It's like we came and the set was pre-dressed," says Jackson.

Jackson says growing up in the '80s during the Cold War helped inspire this movie. He admits he has a slight obsession with nuclear war, though he didn't know this particular bunker existed until a year ago.

The Debert bunker was one of six "Regional Emergency Government Headquarters" constructed in the early 1960s by the Diefenbaker government, nicknamed "Diefenbunkers" by the Liberal opposition party of the time. Most remained closed to the public until after the end of the Cold War. The Debert bunker is the only one sold privately.

Andrea Norwood, who plays Grace, says she heard of the Diefenbunkers, but didn't know much about the one in Debert. "It's amazing, the idea of a big underground ruined complex," says Norwood. "I was pretty excited to get inside it." Norwood and crew spent over two weeks on location, staying 10 to 11 hours a day inside the bunker.

Norwood says the authenticity of the location helped her delve further into her role. "It's 360. In all directions you have set," says Norwood. "It's the difference between having a flat thing that someone has built and you're standing in front of. This is a full environment."