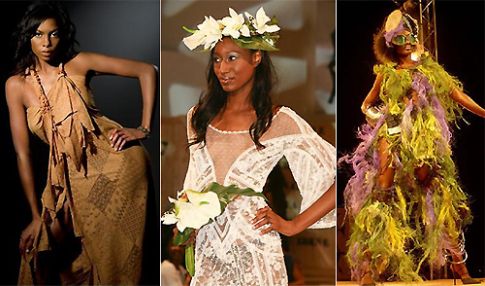 This Sunday night, at FRED from 7-9pm, there’s an art auction that shouldn’t be missed. Kevin Lewis, Michael Lewis, Melanie Colosimo, Laura Dawe, Andrea Dorfman, Michael Fuller and the list goes on and on, are all donating work in support of 4 Rwanda, an exhibition of four Rwandan artists coming to FRED in October. There's a special, local connection with these artists: two of the artists were hired by Halifax artist Kevin Lewis on the 2007 film Shake Hands with the Devil, the Halifax Film production which was shot in Rwanda; Lewis met the other two artists through them.

Here are bios of the artists coming this fall:

Bill (Coco) Ruterana was born in the Democratic Republic of the Congo and moved to Rwanda in 1994 at the age of 10, just after the war. A cartoonist and artist by trade, Ruterana turned to fashion design after painting on models’ bodies for a festival. Ruterana’s designs made a huge splash in Paris last February. Ruterana was one of a number of creative minds from across Africa showcasing their designs at Labo Ethnik, a celebration of youthful, innovative and multicultural fashion that is part of the programme of the prestigious Paris Fashion Week. His colorful designs are made of umugwegwe, a sisal like grass that grows everywhere in Rwanda.

Illustrator and comic book artist Jean Yves Masengo will be showing excerpts from a graphic novel in which he talks about the days that lead up to the war in 1994, when he was 14 years old. In the style of Maus (Art Spiegelman's Pulitzer-winning graphic novel about the Holocaust), this is a first-hand version of a genocide though the eyes of 14-year-old Tutsi.

Despite formal training and a lack of proper art supplies (overly expensive in Rwanda), Antonio Nshimiyimana draws with eyebrow pencil and clay dust as though he were trained by a renaissance master to do so. Nshimiyimana’s parents died when he was two years old. He grew up at an orphanage that was across from an art school. As a child, he would wander across the road and watch the students work. As he began to draw, the instructors at the school noticed his natural talent and encouraged him. At the age of 10 he left the orphanage to live with an uncle, but still continued drawing. In 1994, when Nshimiymana was 14, the art school that fostered his talents was destroyed in the war. Today he makes his living in Rwanda, drawing portraits, painting and working on commissions.

Theogene Kabalisa was 21 years old in 1994. He is currently living and working Rwanda as an illustrator of children’s books. His work is published in Rwanda by Editions Bakame. Editions Bakame was founded in 1995, and it was the first publishing House in Rwanda to create and promote literature for children and young adults. Editions Bakame publishes folktales, picture books, nonfiction, and teenage novels. All the books are illustrated and written in Kinyarwanda, the national language. In addition, he is also a muralist as well as a scenic film artist. Kabalisa will show his watercolor paintings, some of which appear in children's books in Rwanda.