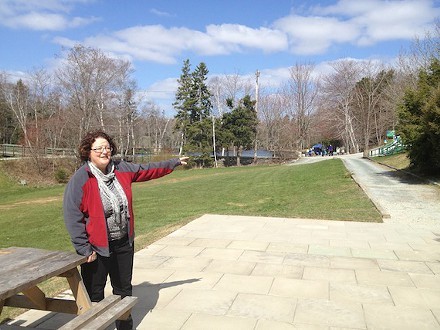 Shubie Park has welcomed a new resident to its grounds. Cafe Brea will be opening up shop Canada Day weekend on the patio at the Fairbanks Center (54 Locks Road). The cafe usually slings coffees and more from 530 Portland Street in Darmouth, this new location will be its second.

“We’re really excited,” says owner Melita Scott. “When we first heard about the opportunity it sounded like a great fit for us.”

Brea was chosen after the Shubenacadie Canal Commission invited local interest in its search for a vendor for the Shubie Park cafe. Cafe Brea has a strong belief in the buy local movement as well as a firm focus on sustainability, using biodegradable cups and lids because they compost faster. “We will ensure that we are being mindful at Shubie by setting up recycling bins and keeping our part clean,” says Scott.

The cafe supports the local scene by roasting its own coffee, selling Propeller sodas, Farmers ice cream and locally sourced baked goods. And it's currently on the search to find a local vendor for doggie treats.

Scott says the menu will change a little at first to determine what the demand is. But Scott says the public will still be getting the same welcoming and community oriented space they find on Portland Street.“To start off were just going to be offering the brewed coffee, baked treats and maybe the smoothies,” she adds.

Cafe Brea does have something new brewing, though—its very own Shubie Blend coffee, with a percentage of the profits going back into supporting the work of the Canal Commission. Scott says this is their way to give back and support the cause.

The new location will be open seven days a week from 8am until 8pm from Canada Day weekend on.