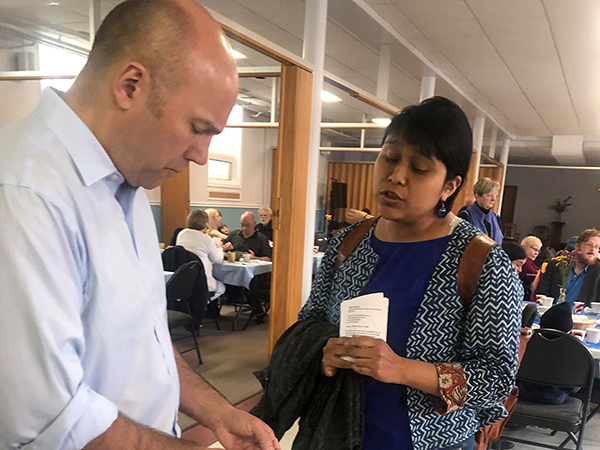 T he Liberal government is already gearing up for the fall elections by sending a troubling "tough on immigration" message. This includes both a move to expand the Canada-US Safe Third Country Agreement (STCA), as well as anti-refugee measures put forward in budget implementation bill C-97.

Thirteen local groups sent an open letter to MP Andy Fillmore on May 14, urging him to "stand up for justice and to say no to the racism and xenophobia which these proposed changes represent." The next day, Fillmore went on the defensive in a CBC interview.

Because the STCA considers the US a safe country for refugees, most people who arrive at Canada's official ports of entry via the US are not allowed to seek asylum here. Under these restrictive rules, people are forced to cross irregularly just to have their refugee claim heard, often risking their lives to do so. Now prime minister Trudeau wants to close even that small window with the SCTA expansion.

On air, Fillmore admitted being troubled by Trump's rhetoric. However, he maintained that the US is safe for refugees and that politics don't influence the granting of asylum. We need only point to Trump's removal of protected status for refugees from the Haitian, Salvadorean, Sudanese and Nicaraguan communities, or his Muslim ban, to see that this isn't true.

Bill C-97 goes even further than the STCA: If anti-refugee measures in the bill pass, they would bar asylum seekers who previously filed a refugee claim in the US, the UK, Australia or New Zealand from making one in Canada–even if they have never had a hearing in that country. They'd be denied the right to a hearing here, which would violate the Supreme Court's 1985 Singh decision.

Fillmore says the refugee determination system is "overwhelmed right now," and it wants to ensure "fairness." He blames asylum-seekers who cross irregularly, ignoring that refugees have the lawful right to flee to safety. Furthermore, there's actually been a 48 percent decline in irregular asylum claims for January to April compared to last year. Importantly, a recent report by the auditor general shows that the large backlogs are largely due to government inefficiencies and our "rigid system."

Finally, the use of an omnibus bill to fast-track major changes to our refugee laws—a move defended by Fillmore—is concerning. While Liberals once promised to put an end to this undemocratic Conservative tactic, it's clear that they're using the same playbook.

It's time for the Liberals to take responsibility and to fix the system in an equitable way, instead of fanning the flames of intolerance with their proposed changes. Lives depend on it. Our messages are clear: Refugees are welcome here! No one is illegal!