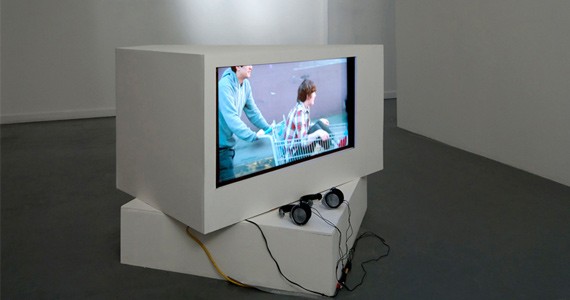 Smiling for the camera is an ingrained response. But the performance doesn't stop there, according to Vancouver-based video artist Karilynn Ming Ho.

In her second solo exhibit, Versions 1,2,3, Ming Ho explores the way in which people (re)act when the camera's turned on.

Ming Ho only graduated from Simon Fraser University in 2010, and she has already shown her work in galleries from coast to coast. One of her installations, Where Where There There, was even reviewed in the most recent issue of Canadian Art Magazine.

Versions 1,2,3 opens this week at the Khyber Centre for the Arts. It consists of three iterations--- versions one, two and three---of eight different video scenes projected on the gallery wall, as well as props from the videos placed around the gallery.

The original video is gleaned from footage taken by Ming Ho of herself and two friends wandering around Vancouver, "performing themselves" in front of the camera. Ming Ho describes the video as "improvisations done out in the open, using everyday objects to create this mundane narrative."

Versions two and three are reenactments of this original video "script," using actors and props---"abstractions of the real world," as Ming Ho says---in an indoor setting.

She is interested in the way the knowledge of the presence of a camera affects people's actions and interactions. For version one, she says, "I just followed them around with the camera and it made them feel self-conscious so they started to perform."

Ming Ho works in reality television post-production, so she is no stranger to the effects the spotlight can have on people's behaviour. Creators of film and TV also have a lot of conventions to follow, and another aspect of Ming Ho's exhibit is exploring what happens when convention meets improvisation.

"I'm placing these cinematic rules on top of what was so improvised to give it some structure and, in doing that, I remove myself and the camera as part of the scene and make it into a cinematic interpretation of those moments," she explains.

"Despite the fact that it's called reality television, we do a lot of work constructing and also fabricating a kind of story," says Ming Ho. "So that kind of seeps into my work. I'm always toeing the line between what actually was and how I can manipulate it and change it and structure it so that it becomes something else."

Ming Ho has a background in performance but, in the past five years, she has gravitated toward video.

"I think it's a really powerful medium," she says. "We grew up with the language of film and cinema. It's basically the form of the 21st century. The grammar of the cinematic form dominates our way of seeing, and being."

The artist has recently become interested in collecting YouTube videos to use as scripts, and her newer work often involves re-performing and mish-mashing them. "You'd be surprised how many really bad videos there are of people just dancing in their room or acting in front of the camera," Ming Ho says, laughing.

She has a couple smaller group shows coming up, but she's planning on slowing her output.

"I've been going really hard the last like two years in terms of just creating a lot," she says, "so I'm hoping for a little quiet time so I can re-ground a little bit."

Speaking of Khyber Centre For The Arts , Film + TV