SMU Art Gallery turns any preconceived notions you may have about ceramics on their ear. 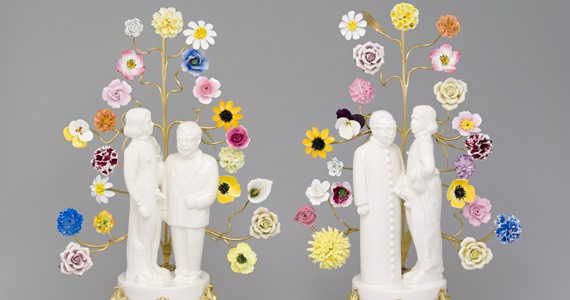 Spiked black leather teapots and massive golden phalluses have taken up residence at Saint Mary's University Art Gallery and these conceptual works are ready to challenge any and all humdrum ceramic stereotypes.

*Camp Fires: The Queer Baroque of Léopold L. Foulem, Paul Mathieu and Richard Milette* surveys five decades of subversive ceramics produced by three gay, francophone Canadian artists. *Camp Fires* was curated by SMU Gallery director/curator Robin Metcalfe for the Gardiner Museum in Toronto and opened during July's World Pride celebration. Now, our city has the opportunity to experience these artists' shared perspective on life outside of the sociopolitical and artistic mainstream.

“I am over 65,” says Foulem, “I have over 200 shows, I've been in so many museums and in 50 years I have not exhibited once at Musée d'art contemporain de Montréal. Does that mean that my work is not art or it's their problem? I feel it's their problem. It's like my sexuality, I have no problem with my sexuality, other people might have some, but not me.”

Ceramics exist in the margins of the art world in much the same way that queerness exists in the margins of the sociopolitical world. Ceramics are accepted by niche galleries and museums but often shunned by mainstream institutions. “Pablo Picasso made ceramic objects, cast them in bronze, they put the bronze in the sculpture catalogue but they didn't put the ceramic in the catalogue,” says Foulem. “Why? Because it's bronze. But that has nothing to do with idea, you understand?”

Foulem's “Return from Brokeback Mountain” (2006-2007) is an absolutely charming Meissen-yellow ceramic rectangle with gold tone feet and finial. The rectangle has three illustrated panels devoted to naturalistic flowers and one featuring two male Mounties in full regalia straddling a single horse. The image is subtle and the meaning is unmistakable—especially when combined with the armature's obvious fruit motif.

In “Pair of two male couples in Pseudo Rococo Setting” (2012) Foulem presents a decadent duo. In both pieces an aura of brilliant flowers on golden tendrils surrounds the stylized figures of an elder man and idealized male youth. Upon closer examination the older males prove to be a priest and Colonel Sanders, respectively. In both instances the youth's prominent nipples and genitals are exposed and erect. Represented in a lush and inviting aesthetic, pederasty feels especially deviant.

Foulem's pieces marry beauty and subversion. The colours pop, the lines flow, the beauty seduces while the ideas betray the comfort created by a pleasing aesthetic. The marginal status of his chosen medium enables Foulem to explore queer culture and queer ideas through his practice.

“Ceramics is a marginal art so already you can do whatever you want to do,” says Foulem, adding, “Being gay, to me it's just natural but I think it's probably more political if you do it in ceramics.”