The Cape Breton mayor and Union of Nova Scotia Municipalities’ president on why Halifax needs to be Atlantic Canada’s economic engine of growth. 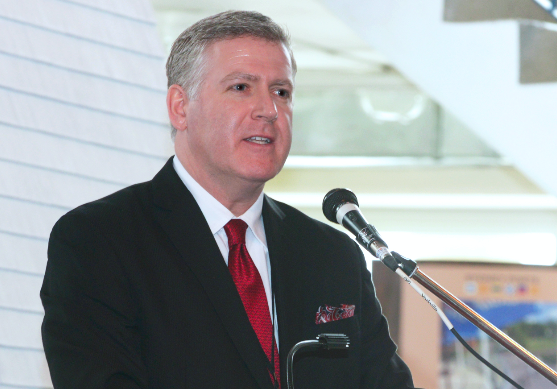 Politicians and bureaucrats are gathering this weekend May 4 to 6 in a Greenwich inn for the Union of Nova Scotia Municipalities’ seasonal meeting. Items on the agenda include the “strategic” spending of infrastructure money collected from taxpayers, and a report from the organization’s current president, mayor Cecil Clarke of the Cape Breton Regional Municipality. A former provincial cabinet minister, Clarke, 48, heads the board of directors and communicates for the union (an umbrella group of 51 municipal entities) with other levels of government on municipal matters. Clarke spoke with The Coast about the issues affecting Nova Scotia’s cities and towns, and the role Halifax plays in Atlantic Canada’s success.

What are the municipalities’ most pressing infrastructure needs and where’s the money coming from to address them?
The number-one pressing priority for municipalities is roads, and basic water and sewer infrastructure. The funding for that, with the new Build Canada fund in the federal budget, has opened up opportunities (and) the provincial budget has designated some more money. So those are positive signs. The challenge always is: When does the work get done? I really think we’ll be planning towards next year for major project activity.

How often does the UNSM contact the provincial and/or federal government about infrastructure? Is it essentially a regular lobbying campaign?

The UNSM is constantly in dialogue with the province. We’re working on a partnership agreement for things like roads and where operating matters come into consideration. That’s really a weekly, if not a daily, exercise with UNSM reaching out and connecting with the province. Most of the federal infrastructure is dealt with through the (province), so there’s not as much direct federal contact from the UNSM.

The province recently released a planning-tool index that summarizes the financial health of our municipalities. What do you have to say about how some of these local economies are doing?

The (index) is really a very important measurement tool that I welcome, but it also speaks to the reality of sustainability across the province. Thus the discussions around amalgamations and regional co-operation. The challenges for places like CBRM is we’ve already amalgamated and we still have pressures or red flags that are significant, for a community like ours, versus some of the robustness that thankfully Halifax is able to enjoy.

Halifax is seen as the engine that powers the economic train in Nova Scotia. Is this a good thing, or bad?

It’s essential Halifax continue to be that economic engine for Nova Scotia, and more importantly continue to be the centre for Atlantic Canada. What we do need is stability in the rest of Nova Scotia. Continued decline and economic downturn or uncertainty throughout the province doesn’t help Halifax. But without Halifax being that engine, it will not help us move forward in the regions as well.

Despite UNSM efforts, the vast majority of municipal councillors are men. Why haven’t things changed significantly on that front?

There’s no easy answer, in terms of women in politics. It’s about getting the best people to run, and there’s a lot of very talented women in this province who can make a huge contribution. But it’s just about, in some ways, how things (in local government) systematically have been structured that have not been the most conducive, and inviting and welcoming, for women to be in politics.