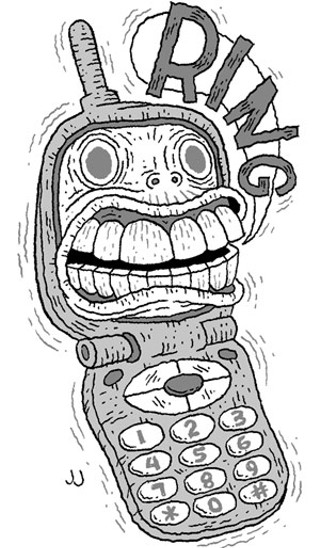 I have this cell phone plan---free evenings and weekends and 300 daytime minutes a month. But I've recently come across a better offer. So I'll ditch the cellphone---Motorola 120c, circa 2002---and buy, as a replacement, not the newest and holiest of holies, the iPhone G3, but, instead, a watch. You know? Tick-tock? Instead of the ringtone for the Yeah Yeah Yeahs' "Tick?"

OK, fine, I'm fronting there---my cell's so old it doesn't do downloadable ringtones. My reception is touch-and-go in off-the-map spots like, oh, Bedford and Dartmouth. And let's say I'm in peninsular Halifax. The hoi polloi might be gabbing away without concern to their friends, but the poor bugger I'm connected to spends the bulk of his time going, "You're cutting out. Um, let me move. OK. You're what? Nah, no good. You're cutting out. Just bloody call me when you get home."

The advanced age of my phone indicates precisely what you probably have guessed: I'm not much of a cell person. Even when my Motorola was a young buck it spent most of its time in the pen. I never was one of those buzzing bees yakking away in restaurants or the kind of jackhole who supersedes politeness and common salutation with a jolt of the chin up from the phone blah-blah-blahing in the middle of ordering at Steve-O-Reno's.

But beyond my attentiveness to common courtesy and my cell habits as they relate to that personality quirk, it's a simple fact: I don't need my phone.

I don't need it for work.

I'm never five minutes late (I'm either early or disastrously delayed. Like, an hour. Or a whole day. It's not something you can call and explain as a courtesy.)

And what about emergencies, you say?

Well that's why I got the damn mobile phone in the first place. Because it seems like such a good, safe thing to do. So prudent. So solid.

Now, years and thousands of bucks later, I've finally clued in: If there is ever really an emergency in my life---charging elephants, purse-snatching, falling into a gopher hole, rear-ended by a politician, choking on a sugar-snap pea at the Farmers' Market, etc., etc., etc.---someone will help me out. Just, you know, someone. No, wait, everyone. Everyone has a cell phone. (And if the emergency is particularly interesting, some other person will even record it on her camera and email it to me before the ambulance even pulls away from the scene.)

Truly: The only thing I need my cell phone for is to tell the time.

And I remembered recently that a long time ago, I used to wear this piece of jewellery---silver, shiny, delicate, lovely; nothing like my Soviet-era, scratched-up shit-box Motorola---and this wonderful little piece of jewellery TOLD ME THE TIME. Right there! On my wrist! Honest to Jehosephat! No digging through used Kleenex and god-knows-what in my purse or pawing sticky, sweaty underwear in my gym bag.

So far, one million Canadians have bought the iPhone G3, including Christian Meagher, the Haligonian and first Canadian to buy one on his native soil.

This stampede is partly the lure of the cult of Apple, but there's a deeper selling point in the iPhone, too: It's a hallmark of the Apple brand and the meaning behind the company's best-known ad slogan "Think Different:" buy the iPhoneto simplify.

With iPhone, so it goes, you can replace the basketload of electronics jostling around in your messenger bag and stuffed into your pockets radiating your balls: You've seen that YouTube vid with cellphones popping popcorn, yes? Apparently it's a hoax. Still: Do you trust your testicles to the IT industry? With one device, you no longer need a camera, cell, iPod and computer. It's all in the iPhone.

Well I've got a better strategy for simplification and it beats Apple's in an instant: Resist the urge to photograph and film every moment of the day; listen to music on my iPod Shuffle which, unlike the iPhone G3, is small enough to be stuffed into my bra when I go for a run (There, for all you people who've seen me running and wondered, "What the sweet Christ is that woman doing to her breasts?" Now you know. I'm skipping forward through that annoying slow song on Funeral. Happy?); use the phone at home; check my email and surf the web at my desk.

And when I need to know the time? I'll think different; I'll look at my wrist.

Early risers jump the gun at the Farmers' Market