This Bilingual foursome is Halifax's next big band. 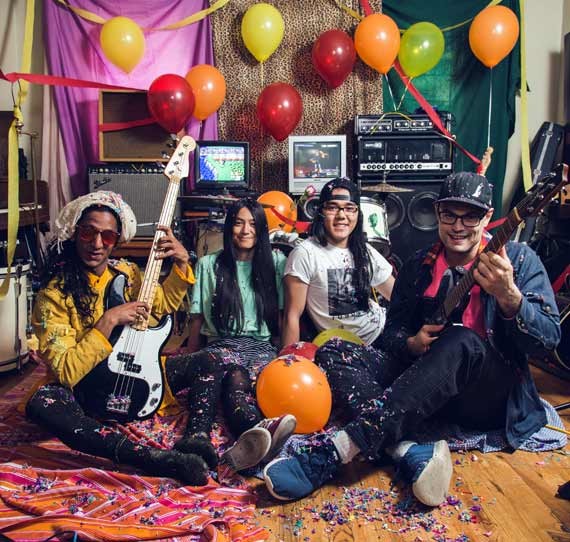 Over coffee and snacks in the room where they recorded their debut EP Mountain God, the four members of Mandarin-pop indie-rock band Century Egg show me how to eat a Tim Tam Slam. Just take the chocolate-coated biscuit, make a straw by biting both ends, slurp your coffee through it and eat it all at once. Like the band, this treat is simple and sweet.

"I kind of want to try that with a chicken wing," says Robert Drisdelle, the guitarist. A few years ago, he and his soon-to-be wife Keyu Shane Song, who had never played music before, started writing and recording demos together. Last fall when Nick Dourado (on bass) and Tri Le (drums) heard the tracks, they begged to be included. But of course.

In April, Century Egg released Mountain God, four beautiful songs that might be the first of their kind from a Halifax band, and possibly across Canada. Blending indie-rock rhythms with staples of Chinese folk, Century Egg's sound is unique. And two of the EP's songs are sung in Mandarin: "Since I Caught You" is a love jam that Drisdelle wrote for Song, and the other is a cover of Taiwanese ballad singer Teresa Tang.

Influenced by Fae Wong, Song's songs also often reference Chinese pop, which she listens to while working as an animator.

"There are also references to ancient Chinese literature," Song says. "In Chinese culture, we believe every river and mountain has a god, like the spiritual existence of a physical location, so I wrote 'Mountain God' about the opposite kind of god, who eats meat, hangs out with bad animals like tigers and wolves, and lives the way he wants."

To preserve the atmosphere of the songs, the band doesn't plan on translating them. But there is some talk of providing phonetic translations so that anybody can sing along in Mandarin.

"The interesting thing about Mandarin is that each character is one syllable," says Drisdelle of the bilingual songwriting process. "I'm not fluent in Mandarin yet, so Shane would write the lyrics with the characters and underline the most important cadence, so we'd know how to structure melodies."

Because the character and culture of popular Chinese music is more pleasant than rebellious, Song explains, "I think we all want to do something that is nice, instead of cool. At the beginning of this, the concept was not to try to be cool, because if everybody was trying to be nice, the world would be a better place."

Dourado elaborates: "Sharing this band is fun. It makes people really happy and it makes us really happy, too." This generous attitude is why Century Egg is so sonically satisfying.

In the last few months, Century Egg has created media buzz across the country. The group's working on a second EP, a video and eventually an LP. Their live show is energetic and captivating. "Nick moves around like a human lava lamp," says Drisdelle. For Le, who usually plays in hardcore and punk bands, "the challenge for me isn't to be loud and fast, but more dynamic." This is a delicious dream.