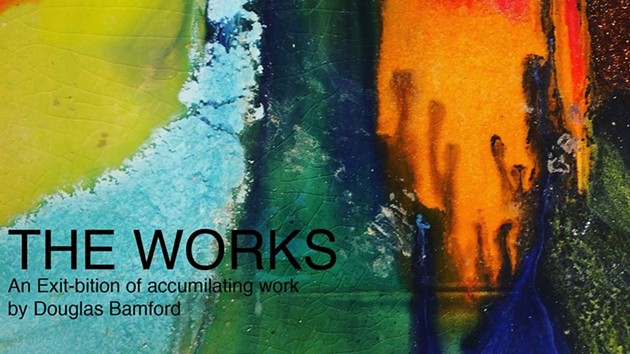 Beloved NSCAD ceramics technician Doug Bamford is closing the chapter on 23 years at the college with a goodbye exhibition at the Anna Leonowens Gallery and a retirement party at Art Bar + Projects at 7pm on Monday, July 31. the WORKS, opening July 31 at 5:30pm and running to August 5, served as a great excuse for Bamford to finish up some projects he'd been puttering on. "[Anna Leonowens Gallery director] Melanie Colosimo asked me if I wanted to have a retirement exhibition and I jokingly said 'you mean an exit-bition? You're darn tootin' I do.' I had a bunch of half finished work and a bunch of new ideas and I wanted to put the jumper cables on them and make it happen fast," says Bamford. "They're all pieces you could say I’ve been working on for 20 odd years but they're all coming to completion at the same time. And there’s some brand new work too."

In 23 years, Bamford became an essential part of the NSCAD experience. With his retirement, he hopes to allow a changing of the guard. "Of course the students were all crying, mourning, weeping, wailing and gnashing their teeth," he says, jokingly. "But I think it’s time for a change in the department. I’m still full of beans but I’ve been doing it for 23 years, it's time to move along and time for some goddess energy, it’s a bit of a male stronghold and we're all hoping to see a woman take the part."

Now located in Lunenburg, Bamford says fell into his role at NSCAD accidentally. "I came to NSCAD from Toronto 1991 to get an arts education and teach high school, I was self employed so I wanted a cheque on Fridays, summers off and some kind of dental plan," he says. "One of the NSCAD faculty members—Walter Ostrom—said 'you don’t want to teach high school, why don’t you stay here with us?' And I did and it turned into 23 years. It was great, more than I ever could have wished for."
"I'm very excited for the next chapter and the chapter I’m living. It’s such a cliche—I’m retired and I’m busier than ever. I call it a return to being self-employed." tweet this
Five years ago, Bamford moved to Lunenburg, in a move he says was "preparing for the return to the studio full time."

"It’s been absolutely wonderful helping bright young artists make their dreams come true, but I’d been an artist all my life, and it’s time for me to get back to doing that," he says. "In terms of the work in this show, something I’m most excited about now comes from observing the built material world in Lunenburg—fish hooks become a motif, and propellers... decoy ducks become expressive characters—I’m looking forward to this direction of assimilating my neighbourhood in my work. It’s made a big impression."

Bamford and a group of like-minded individuals started the Lunenburg School of the Arts in 2013, a school offering short intensive courses taught by professional artists. "I did that to make the place where I live more exciting and it certainly has done that," he says. Bamford's home—known as the Fairbanks—has become a de facto artist residence, and he runs Skullduggery Gallery from the first floor of his home. It's safe to say Bamford' post-NSCAD life will be busy.

"I'm very excited for the next chapter and the chapter I’m living. It’s such a cliche—I’m retired and I’m busier than ever. But there's so much going on here that I need to learn how to pace myself a bit. I call it a return to being self-employed."