Check out this Swiss Army knife for weed

Doob it all with the DoobTool 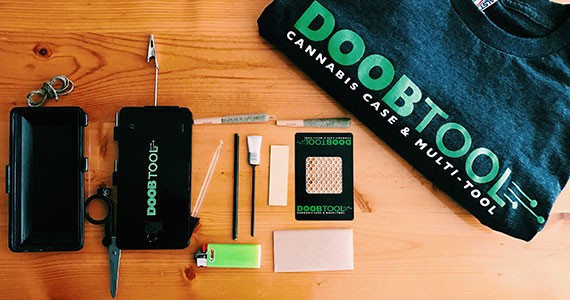 Brett Evans wants to squash the stigma around cannabis and do away with the stereotype of lazy “potheads.” He’s invented the DoobTool, a product meant to cater to cannabis users with active lifestyles.

“Here’s a tool that will allow you to go hiking and camping,” says Evans, who is based in Halifax. He’s also the founder of the Canadian Pro-Cannabis Group, which connects patients with licensed producers of medical cannabis. The DoobTool is a “cannabis case and multi-tool”—a Swiss Army knife for weed, if you will. It’s been about a year and a half in the making.

“What we wanted to create was something that was multifaceted,” says Evans. “People consume cannabis in different ways, so we wanted to incorporate the masses when it came to designing the tool.” The DoobTool is actually nine different tools in one, including a glass dabbing tool for cannabis oil or wax, a grinder card and a pair of fold-out scissors.

The Indiegogo campaign went up online a little over a week ago. Evans and his colleague Chris Lewis had to deal with a few hurdles when setting up a crowdfunding page for a product that clearly falls under the category of drug paraphernalia. For one thing, they aren’t allowed to offer the DoobTool as a “perk” for those who contribute to the campaign.

Instead, a $35 donation will get you a return of a $35 credit for the online store. That also happens to be the cost of a DoobTool, but you could use it to buy a bunch of stickers if you really wanted. They’re also not allowed to advertise on platforms such as Facebook.

“We’re running into some problems with that, but it’s not stopping us at all,” says Evans. Evans specifically wants the DoobTool to be launched ahead of marijuana legalization. This way, they’ll be able to have “all of the kinks worked out” and make people familiar with the brand beforehand. “We wanted to be ahead of the curve,” he says, “and say, ‘You know what? This is what legalization is gonna look like.’”