Chenpapa departure an indication of larger changes at Seaport Market

The Chens are retiring after more than 30 years, but worry other vendors won’t be able to survive the shift to a weekend-only market.

Now, their Halifax Seaport Farmers Market stall, Chenpapa, is one of the busiest in the whole building. “We always sold out every Saturday,” says Chen.

Last week, the Chens' daughter Pay announced on Twitter that the couple would be retiring and serving up their last steam buns, noodles and dumplings this coming Saturday, February 6.

But Chen, ever humble and a little wary of social media, hasn’t even seen the post and the outpouring of love from the community that followed. “Pay call me, she called me yesterday and say ‘Mom, you will be really busy this weekend.’ I say, ‘why?’” It’s Chenpapa’s love and appreciation of its regular customers over the years that has kept its stall open, even when other market vendors have seen dwindling traffic.

“The main thing are my customers. I love them too,” she says. "Because you see, we can trust each other.”

So trusting, in fact, that on many days a cash tray is set out on Chenpapa’s counter for customers to make their own change.

Through the decades, Yen and Steven have become friends with their regular customers. During their second-last Friday in business, customers stopped by to say thanks and give gifts of locally made jewellery and toys for the Chens' grandkids.

The market mainstay has also supported other vendors over the years, buying produce from the farmers and using local ingredients: “You can use fresh ginger, fresh garlic, onion, green onion, that kind of stuff,” says Chen. “I want my customers to see me, what I cook, what I put in. That’s my way.”

Chen says she was inspired to use whole fresh ingredients by her own father, who owned a canned goods company in Taiwan. “He started making canned food, and he told us if you have chance, don’t buy canned food,” she says, adding that pretty much the only thing they buy premade is soy sauce.

Often, the Chens bought from their old neighbour at the market, Getaway Farm, but the butcher is one of several vendors that has left in recent years. “I always buy from them for pork buns, for everything, for the dumplings, and he told me 'I have to move out. I have to.’ They gone, they go find a cheaper place,” Chen says.

With so many longtime vendors leaving the market—even before COVID—and big changes afoot, Chen worries there won’t be enough steam to keep it a vibrant destination. “I always say I’m busier than other people, that’s why I can open after COVID, because I have regular customers,” she says.

COVID, of course, made things even worse, forcing the Chens to dip into their personal savings to keep paying rent even when their market stall was closed from March to August.

“Because I’m working many years, of course I saved some money for this summer,” says Chen. She says she’s “lucky” to be at retirement age and wouldn’t want to be a young person starting out at the market today.

“You can see young people all move out, always move out because high rent here,” Chen tells The Coast. “If young people want to do this, you need a support.” 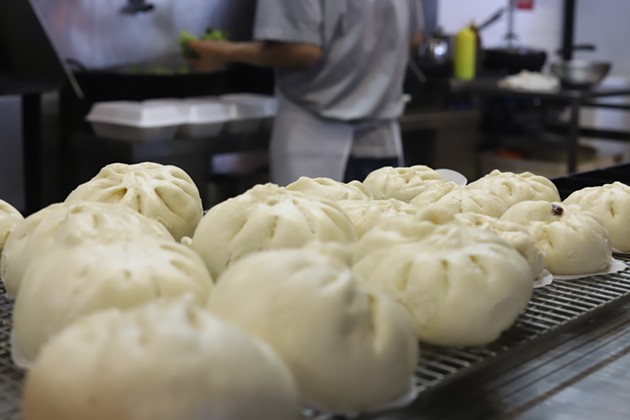 With the market’s new plan to switch to a primarily outdoor weekend market starting next month, Chen says they were told to clear out by March 12, which sped up the retirement process.

“I wait for last minute,” Chen says, but she still needs to sell all the industrial cooking equipment from Chenpapa, including fridges, freezers and stoves.

Before the market's move to Pavillion 22 was announced, Chenpapa was initially offered a bigger space. It was also offered a stall in the Brewery Market at 1496 Lower Water Street, which has a co-op ownership model and was offering a place to go for stall owners weary of the coming changes. But Chen refused—she's focused on retiring as she and her husband slow down.

The tofu making process with a slow rise to popularity used to take Steven a few hours—but then as he got older it took even longer. “He have to use kitchen all day. We can’t do anything [else],” says Yen. He'd spend almost eight hours making just that, so he stopped.

But Yen's energy is still there and she might continue to cook on occasion to donate meals to different community groups. “I always make food for the hospital, and I like to help people,” she says.

Aside from that, retirement is looking calm and relaxing for the Chens. “Usually, this time of year we always travel, so normally, I always go back to Taiwan, BC, my son’s in BC, we have two grandchildren,” Yen says.

For now, they’re still in Halifax, where they plan to stay until Yen can convince her husband to move out west to be closer to their grandkids.

“Of course we have to move someday close to kids, right?” says Yen. “But my husband still want to stay in Halifax. He says ‘If you want to go, you go.'”